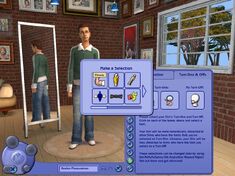 Chemistry is a system of measuring attraction between Sims in The Sims 2. The ability of Sims to form a romantic relationship is affected by the Sims' chemistry towards each other. Chemistry is controlled by many factors, including turn-ons and turn-offs, personality and aspirations. Levels of chemistry between two Sims is indicated by the presence of "lightning bolts" on a Sim's portrait in the relationship panel, up to three bolts, indicating high chemistry. Sims with bad chemistry will have a single "crossed out" lightning bolt over their relationship panel portrait instead.

Chemistry was introduced in the The Sims 2: Nightlife expansion pack, and is present in all expansion packs and stuff packs released after Nightlife.

Until the introduction of chemistry, Sims were attracted to each other fairly easily. Only a massive divergence of interests would harm two Sims' relationships, but even that could be overcome with a bit of work.

Sims on community lots can scope crowds to find those special Sims. "Scope Room" is a self-interaction that must be selected by the player. When a Sim uses the "Scope Room" self-interaction, Sims that he or she could be attracted to will be surrounded by a white glow; in general, a stronger glow indicates stronger attraction. "Scope Room" will not be available when clicking on a Sim unless at the Sim could be attracted to at least one Sim in the room. While Sims will not scope a room autonomously, they may show autonomous attraction or repulsion reactions to other Sims. Players should note that these reactions, and the results of "Scope Room", are one-way. A controllable Sim can be directed to ask another Sim "Do You Like What You See?", which will elicit an attraction, repulsion, or neutral reaction depending on how attractive the Sim being asked finds the asking Sim. Players should note that, if the asking Sim has the trait the Sim being asked is repulsed by, they will react negatively to the asking Sim, even if that Sim also has a trait that turns them on. The Player could also direct their playable Sim to "Check Sim Out" on another sim, to discover whether the playable Sim likes them or not.

Family members who have strong chemistry with one another will want to be near one another. This can cause results such as a Sim overlooking a nearby kitchen sink in order to wash dishes in the bathroom, because a Sim they have chemistry with is in the bathroom. A common result of chemistry between two Sims in the same room is that a Sim told to do something such as study from a bookcase or read a newspaper will tend to pass up a nearby seat in order to sit near the other Sim.

It is not possible to select chemistry based on gender, age, or skin color. However, it is possible to indirectly select chemistry for gender by making the Sim like or dislike make-up and/or beards, and Sims can be made to dislike/like elder Sims by selecting gray hair. Teens will only have chemistry for other teens. Gender preference also plays a role in chemistry. Once a Sim's preference for a gender becomes negative, the Sim will not have chemistry for members of that gender, though Sims of that gender may still show autonomous attraction reactions to that Sim, and may still focus on that Sim when using "Scope Room". In addition, "Scope Room" is not available to Sims whose gender preference is still neutral.

A full selection, with BV, FT or AL

Chemistry is determined based on the attraction score between two Sims. This attraction score is calculated from each Sim's zodiac, primary aspiration, current personality (not genetic), turn-ons, turn-offs, and any additional effects that affect attraction.[1] All of these factors are added up to produce the attraction score and averaged to find the chemistry. Thus, one Sim may be more attracted to the other, yet both would have the same chemistry score. The actual calculations for these scores are slightly complicated, but easy to understand.[2]

Secondary aspirations do NOT count towards this score. Sims with the same aspiration have a +35 attraction score for that category with the exception of Grilled Cheese, which has a +145 score. Otherwise they are determined thusly:

According to Cyjon, some of these aspirations have a one-sided attraction, but he averaged them when he created his charts since he didn't find any real effect on the game.

Again, note that some of these zodiac pairings are one-sided, but the source cited decided to average them out.

This whole section is the reason why the encouragement system is important. Sims with the same zodiac are neutral to each other, thus Sims that have the same exact genetic personality would get high scores here, but would never be beyond 70 points because their zodiacs cancel each other out. To get the amount of points needed for 3-bolt relationships, Sims need to have a pair of signs that have +35 attraction and be close in personality. Thus it is far more likely that CAS Sims or playable Sims beyond the first generation that vary from the norm have 3 bolt relationships with their partners. The personality portion of the attraction score is the most complex.

For those of you who are math-oriented, here are the formulas used: If both qualities are on the same side of the scale (6-10 or 0-4) there is a bonus of 7 - (difference / 71). Note that 5 is excluded, although not when both sims have 5 points for that quality pair. If they are on opposite sides of the scale (say one is grouchy while the other is nice), there is a penalty of (difference between Sim and 5)/71 for each Sim added together.

If you don't especially care to track down every stray decimal, the following is a chart of estimated values based on personality points. Again, note that if the personality is on the same side of the scale, you use the first chart. If they are on opposite sides or one is 5, then use the second chart. When using the Penalty chart, you find the penalty for each Sim and add them. If the combined penalty is less than -7, it becomes -7.

Turn-ons and turn-offs are the part of chemistry that will easily distinguish which traits Sims like and don't like. Each trait that matches Sims' turn-ons adds a +17.5 to the attraction score and -22.5 for a matching turn-off.

Some of the expanded turn-ons and turn-offs have been fixed by Tunaisafish's Attraction Traits Fix.

With FreeTime, Sims can wish for Beauty from the genie, which sets the attraction score to a flat +100 for all relationships he or she has with other Sims. This modification is actually set first and, if true, the rest of the calculations and effects are skipped. This means that if a Sim who had an active wish for Beauty took a love potion, the love potion would be nulled until the Beauty wore off, resulting in a wasted love potion.

If two Sims with negative chemistry are married, engaged, going steady, in love, crushing, or develop a long term relationship of at least 70, their chemistry points will be increased to zero the next time they interact face-to-face. Although the total attraction is an average of individual attractions, if either individual Sim has an attraction toward the other of < -25, then the final averaged attraction score will be adjusted by -50. Note that both of these modifications are done after finding the Sims' chemistry using the methods given above and applying the modifying effects described below.

In FreeTime, Sims whose primary or secondary aspiration is Romance can get the Massive Attraction aspiration benefit, which modifies the affected Sims' attraction points by +40. Bon Voyage has the vacation benefit Je Ne Sais Quoi, which also gives a +40, and being on Twikkii Island will also slightly increase a Sim's attractiveness by +2. The effects of the Massive Attraction and Je Ne Sais Quoi benefits stack, so a Sim who has both will have a +80.