Charity Grant is a Sim in The Sims: Bustin' Out.

Charming Charity (aka Charity Grant) has been called a "National Treasure," the "High Priestess of Modern Art" and "a goofball." As one of the key creators of the Anti-Meaning Movement in the 1990s, Charity has been often imitated but never duplicated. Art fans worldwide prize her early work painted with snakes and snails and puppy dog tails. Conservative lawmakers cut off her funding however, after she unveiled her latest masterpiece: a 20 foot long, nude, anatomically correct cinderblock.

Charity and Artie opened an art museum called Studio 8. But not many sims had visited, which lead to failure to pay their assigned rent. Malcolm their landlord came and repossessed their pottery wheel and marble block.

Charity has a has an Asian-Chinese appearance, She wears blue Chinese gown, wears brown high heels and she has a hairbun style with a chopstick in her hair.

She has an Aquarius personality. She is very sloppy and shy, she isn't an active person, but she is extremely nice and playful. At first she has a Libra personality, but that is a mistake and changes after a saved game.

The Sims: Bustin' Out Edit

Charity has the following skills:

She works in the Counter Culture career track as a Flower Child. But she cannot be promoted or demoted. 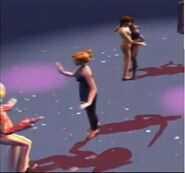 Charity Dancing near Bing Bling
Add an image to this gallery
Retrieved from "https://sims.fandom.com/wiki/Charity_Grant?oldid=820646"
Community content is available under CC-BY-SA unless otherwise noted.