The Sims Wiki
Register
Don't have an account?
Sign In
Advertisement
in: Skills, Skills requiring objects, The Sims,
and 3 more
English 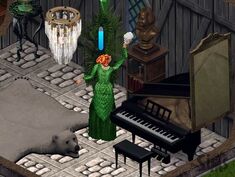 Charisma is a skill in The Sims series. In games prior to The Sims 2, it is a skill that has relatively little practical value outside of career advancement. In The Sims 2 and afterwards, it also increases the chance of positive results due to social interactions, such as joke telling and reduces the chance of being rejected. In The Sims 2: University, teens with high levels of charisma are eligible for a special college scholarship.

In The Sims 3, certain interactions and rewards increase starting relationships, such as a celebrity using a charming introduction will instantly have a new friend. Charisma skill-building requires friends and relationships to progress. Charismatic Sims learn the skill faster.

Once a Sim has maximized their Charisma skill, they will receive a certificate in the mailbox a few days later, along with a notification saying: "Of course you know and love Ms. Balistrieri, doesn't everyone? Well, she's learned of your amazing charisma skills and knows you, [Sim name], will soon reach her stellar level of international renown. Please accept this handsomely framed certificate and display it with pride knowing others will see just how skilled you are in the arts of charisma."

Personable
Personable Sims have learned at least 50 Traits of their friends and neighbors. They are able to learn traits more quickly when conversing with new people.

Comedian
Comedians have successfully told 100 jokes, which amounts to quite a few laughs. Jokes told by comedians rarely fall flat.

Smooth, Like Verbal Butter
Received: Reach Level 5
Goal: Use "Smooth Recovery"
Reward: Monetary
Text: Sims like you tend to get into a lot of conversations. Unfortunately, not every comment will land favorably upon the ears of its recipient, so you'll need to learn how to get out of sticky situations. Use Smooth Recovery to fix a social faux pas and you'll earn a little cash for your efforts.

A Charming Experiment
Goal: Assist Experiment at the Science Lab
Text: The Science Facility is conducting experiments to see if charming Sims can convince creatures to do things they don't necessarily want to do. This week, the scientists are paying cash to any Sim that can convince ants do dig holes in specific areas. Travel to the facility to show just how charming you really are.

In The Sims 4, charisma is heavily used to advance in social interactions. The higher a Sim's charisma, the better they become at socializing and at gaining more friends faster. Having a high charisma also boosts the success rate of mischievous, romantic and funny interactions, making the skill helpful for the comedy and mischief skills. Charisma is heavily essential to gain promotions in many of the careers.

Charisma will always be learned by Sims through social interactions, no matter the circumstance. Charisma is also mainly built by practicing speeches on the mirror and by reading charisma skill books. Sims who are confident will build charisma faster, as the emotion boosts the success rate of interactions. Self-assured Sims become confident more often than other Sims, making the trait to be the perfect match for leveling charisma. Outgoing can also be a good trait for raising charisma, as outgoing Sims tend to be good at socialization. Immediately at level one, the success rate of jokes will raise and Sims are able to learn traits of other Sims faster.

Gaining the charisma skill opens up many forms of new interactions for Sims to use, that usually help achieving friendships easier. Along with these interactions are brand new forms of introductions. At level four Sims gain the cheerful introduction, that provides a slight boost to the relationship meter, while the flirty and enchanting introductions gained at level five and eight respectively, will immediately apply romantic relationship points.

The "Brighten Day" and "Flatter" interactions can be used as a good starting point for a relationship, as they offer a great relationship boost. At level four Sims will gain the "Smooth Apology" interaction, which allows them to turn around an awkward or an upsetting conversation, making it a helpful and essential interaction for slight mishaps in conversations. The "Sweet Talk" romantic interaction gained at level six raises both friendly and romantic relationships.

At level seven, Sims will gain opportunities to ask for loans from other Sims. They can ask for either a small loan, which is §500, or a large loan, which is §2,000. Loans do not need to be paid back, though Sims can do so if they want to. Paying back a loan will raise the relationship. Sims will usually agree to small loans, but will most of the time reject large loans if the relationship isn't high enough. If a loan is accepted, the game will start keeping track of how much is owed to that particular Sim. Sims can only give a small loan and a big loan once at a time.

Sims who have gained few levels of charisma can donate either §10, §100, or §1,000 to one of several charities on the computer. Donating to a charity will give Sims a happy moodlet, with the happiness boost depending on the amount of money donated. Good Sims will also get an extra "Did Good" moodlet from making a donation. Sims can only donate once per day.

Sims who have achieved level five in charisma are able to start their own social network account. Once created, Sims can update their network to gain followers. Higher charisma will also unlock more ways to gain followers, such as uploading images and viral videos, or by creating new hashtags. All of these interactions can fail, but the Sim can still gain some followers by doing so. Uploading images has a one-hour cooldown, creating new hashtags has a six-hour cooldown, and viral videos can only be uploaded once per day.