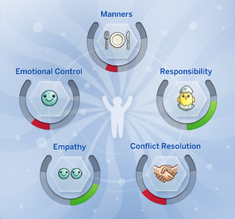 Character values are a feature introduced in The Sims 4: Parenthood. They appear in the Simology panel for Sims aged toddler to teen, and parents can encourage or discipline their children to help them develop these values. There are five different character values: Manners, Responsibility, Empathy, Conflict Resolution and Emotional Control.

Toddlers, children and teens can and will affect their own character values by performing certain interactions such as making a mess or setting the table. Ignoring punishments such as grounding or time outs, will affect children's character values negatively, with washing the dishes and cleaning the house affecting the values positively.

After a teen becomes a young adult, they will receive a special trait that is based on how the teen's character values were. The trait will only be gotten when one of the five values are on their highest or lowest point, and Sims can only receive one trait per value, which is either a positive one or a negative one. Some personality traits can also affect Sims' character values. For example, the mean trait will automatically lower children's empathy, while self-assured will raise their emotional control.

Manners controls Sims interactions and reactions towards household activities. Manners can be raised by having taught by parents to say please and thank you, doing friendly introductions with Sims, setting the table, cleaning up dishes, giving compliments and by having the neat trait. Sims who have achieved the good manners trait won't do any gross interactions, at least not in front of anyone. They have a new "Polite Introduction" that can give them positive moodlets, and can gain friendly relationships faster. Good mannered Sims can also "Offer Gratitude" to the host of a house they are visiting.

Decreasing the manners value can be done by swearing, belching, farting, doing rude introductions, taking off clothes around strangers and by having the slob trait. Sims with the bad manners trait can try to be friendly, but will usually fail on certain social interactions due to having a negative version of the friendly trait. They will often do gross manners such as farting, belching or swearing, and find doing the dishes or washing hands uncomfortable. When they visit a friend's lot, the host will gain a tense moodlet at the mere presence of the impolite Sim.

Responsibility controls Sims independence from their parents. Responsibility can be raised by completing homework and school projects, getting good grades in school, performing well at part-time jobs, taking out the trash, repairing broken objects, cleaning the house and by having the perfectionist trait. Sims who have achieved the Responsible trait will perform better at their jobs and can teach children and teens how to be responsible. They will also work hard by default and have half the usual chance to gain tense moodlets as well as gain occasional boosts of job performance.

Decreasing responsibility can be done by getting bad grades, missing school or part-time jobs, playing in toilets, making messes, disobeying grounding or curfew and by having the childish trait. Sims with the irresponsible trait are uncomfortable at work, but ignoring bills and slacking off brings them joy. They may also encounter new situations when at work which are in general negative, costing job performance. However, they can make the most out of a negative situation as well.

Conflict Resolution controls how Sims deal with arguments and conflicts with other Sims. It can be raised by reconciling after arguments, apologizing after negative interactions, having been taught by parents to say sorry, making peace after fights, trying to fix bad relationships and by having the outgoing trait. Sims with the Mediator trait have a higher chance at successfully apologizing to other Sims and can "Mediate the Forums". They can also mend differences with Sims they have not been friendly with for a long time.

Decreasing conflict resolution can be done by having despised relationships, declaring an enemy, fighting and getting into arguments with other Sims and by having the hot-headed trait. Sims with the argumentative trait will not always start conversations on the right foot with Sims they don't like. Successfully apologizing is harder and they do try to assert their correctness more often than not.

Empathy controls Sims ability to understand and share the feelings of another. Empathy can be raised by volunteering as a family, playing with the doctor playset, asking about negative moods and by calming down, cheering up, consoling about death and by having the good trait. Sims who have achieved the compassionate trait can help other Sims relieve their negative emotions. They can also empathize with them by sharing emotional burdens. However, they get stressed when being mean.

Decreasing the empathy value can be done by doing mean socials with other Sims such as yelling, trolling on the computer, hitting stuffed animals, laughing at embarrassment, mocking sadness, belittling anger, downplaying stress, scoffing at discomfort and by having either the mean or evil trait. Sims with the insensitive trait are able to question other Sims' negative emotions and can also instigate other Sims. Insensitive Sims will have a higher chance of failing socially when talking to Sims with bad emotions.

Emotional Control controls Sims emotions and how they handle them. It can be raised by writing a journal, jogging to clear mind, listening to classical music, playing instruments with emotion, playing with emotions, blogging about feelings when in negative mood, or by having the self-assured trait. Sims who have achieved the emotional control trait can relieve negative moods by jogging, listening to certain music, blogging on the computer, or playing an instrument. In general, their negative emotions will go away faster than other Sims. The decrease rate for negative emotions such as angry, tense, sad, bored, embarrassed or uncomfortable is doubled the usual value.

Decreasing emotional control can be done by having emotional breakdowns, shoving, biting or hitting other Sims, smashing dollhouses, destroying school projects and by having either the jealous or erratic trait. Sims with the uncontrolled emotions trait won't be able to relieve their negative emotions as fast as other Sims. When they have strong negative emotions, they may have an emotional meltdown, which allows an adult Sim to either cry or throw a tantrum to calm themselves down at the expense of other Sims who will become tense. They also occasionally have random negative emotional moodlets and the removal of negative moodlets takes longer than usual.