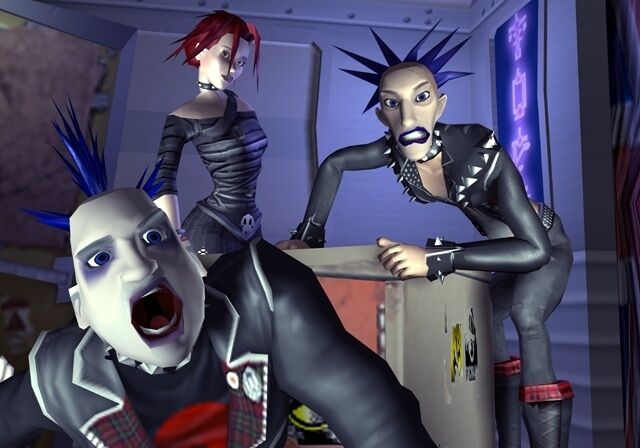 Central Station is the transportation hub and the underground haven for some of The Urbz: Sims in the City's seedier denizens. This urban dungeon exists beneath an expansive succession of support arches. Fluorescent lighting helps keep crime at bay for the regular commuters who stream through here. The wear and tear of years of abuse are visible throughout certain parts of the station as evidenced by the grime caked between the grouted tiles. However, the bathrooms are among the cleanest you'll find in the city, so you have nothing to fear if you feel the need to "do business" while passing through.

Three subway tracks service Central Station: the outer rails that head inbound to or outbound from Central Station and an inactive line that divides the station. The locals converted two parked train cars on the center "dead" line into a mini-arcade and clothing store for all of your studded patent-leather needs. As you enter the station from the stairs and cross the tracks to the opposite corner, you'll find the city-renowned piercing parlor. The parlor can generate a reasonable amount of income for up-and-coming body artists skilled enough to keep at least two out of three customers infection-free. Across from the parlor in a members-only enclosure is the Fight Cage. Anyone with the money to pay the cover charge and enough rep to get access inside can duke out his or her frustrations and potentially win back even more cash. Don't expect to step off the train and manage to get in without working in the underground crowd first.

If you're a daring shopper looking for the most hardcore, out-of-this-world fashions, Central Station's clothing store is a must-see. It's tucked away in the converted subway car that sits to your immediate right as you come up the subway stair entrance. Don't let its makeshift appearance fool you: This store stocks only the best in ripped fishnet, stretch latex, and leopard pattern miniskirts. It also carries accessories you can't find anywhere else in the city such as do-it-yourself tattoos, custom piercings, crimped wigs, and more.

As they say, all tracks lead through Central. Regardless of where you start, if you follow the pulse of the city, it will bring you here. If you're looking for the most direct route, take the subway from Gasoline Row. The stairs off the next stop past Gasoline Row lead right up to Central Station. Once you're in the station, a walkway bridges the two halves of the station, and both of the converted subway cars are open to foot traffic.

Getting a reputation here will get you noticed by the residents of Kicktail Park.

Scary Mary
Add an image to this gallery

You'll be able to pick out the leader of Central Station's main outfit by his electric blue liberty spikes and the bulls-eye combo on his pasty scalp. Known as Kidd Chaos, he runs his cynical, angst-ridden crew with fervor despite rarely showing emotion from behind his lacquered makeup. Scary Mary makes up his better half as a child prodigy turned social rebel. She loves the art of body modification, which shows in how she owns and runs the piercing parlor. Beelzebob Jones isn't the brightest barbell in the barrel, but he has his moments of semi-lucid thought. He's a shade less emaciated than his counterparts and sports a mohawk that matches the color of his hero, Kidd Chaos. Almost the exact opposite of Beezlebob Jones is the self-assured, uninhibited Genghis Lincoln. He wears his blood-red dreads in two high-topped pigtails that you'd better not pull if you know what's best for you. Bringing up the tail of this motley bunch is Frag Grrl, a woman who publicly jokes that her idea of a vacation is to drive cross-country on a crime spree. At least, everyone thinks she's joking.

Upon entering the VIP area around midnight, the player urb will recieve a Stink Bomb social from Darius, which can be used to stop the villain Urangoo McBain.

Like all other districts, Central Station urbz will have relationships with other urbz based on which district they come from.

Central Station urbz will use Greet, Act Friendly, or Act Romantic social moves with urbz from these districts.

Central Station urbz will use random social moves with urbz from these districts.

Central Station urbz will use Act Mean social moves with urbz from these districts.

P4
Add an image to this gallery 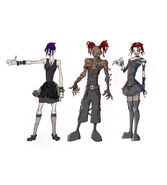 art by Brian White
Add an image to this gallery

Retrieved from "https://sims.fandom.com/wiki/Central_Station?oldid=898171"
Community content is available under CC-BY-SA unless otherwise noted.