Cassidy Purdue is a pre-made Sim who appears in The Sims 4 base game. She is one of six characters in five households who are included in the Gallery that ships with the game. She lives with her brother, Ollie, who may be her twin, as they are both young adults and 24 days away from becoming adults.

Not much is known about her other than her traits and that she has the Musical Genius aspiration. Like all Sims in the Gallery, she is unemployed and has no skills.

Cassidy shares her appearance with one of the default characters in Create a Sim, and appears on the old cover art for The Sims 4, along with Ollie.

One of the most notable appearances of Cassidy

Cassidy, Ollie, Babs and Andre taking selfie on one of renders

Cassidy on another render 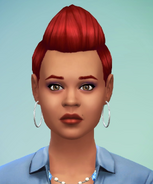 Add an image to this gallery
Retrieved from "https://sims.fandom.com/wiki/Cassidy_Purdue?oldid=885506"
Community content is available under CC-BY-SA unless otherwise noted.