Carl Abbot is a pre-made adult Sim living in Hidden Springs. He is married to Maya Abbot and is employed in the Law Enforcement career at level 10 as an International Super Spy despite his biography stating that he works in the Military career. He has 4 points in the Logic skill and 6 in the Athletic skill. He is an adult with 11 days from becoming an elder. He has an average relationship with his wife, and is acquaintances with his co-worker Sebastian Vanderburg and his boss Louis Swete. 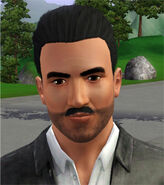 Add an image to this gallery
Retrieved from "https://sims.fandom.com/wiki/Carl_Abbot?oldid=897005"
Community content is available under CC-BY-SA unless otherwise noted.