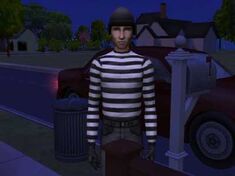 A Sim who works in Criminal career, wearing his career uniform

Careers are a set of jobs in a single field that Sims can work in to earn money. Careers in The Sims are linear, with each job requiring that certain skills and other criteria be met before the Sim is promoted to the next-highest job in the career track. Different careers have different requisite skills and criteria for advancement. Sims can enter into a career by searching for a job, but there are also opportunities for Sims to change careers without starting at the beginning of a new career track.

A Sim may get a job by reading a newspaper, using a computer, or just going directly to the job location.[TS3] There are no skill requirements to enter a particular career although doing well in school or university may allow the Sim to start at higher level jobs. Sims can also get a part-time job or start in a career track by going to its Community building.[TS3] A Sim getting a job from the newspaper starts low in the career track, usually at level one (exceptions exist; see below). A Sim getting a job from the computer (the different types of computers work identically) can start higher. (In The Sims, Sims will start at level one whether they get their jobs from the computer or from the newspaper.)

Professions (or active careers) are a broader kind of career introduced in The Sims 3: Ambitions and The Sims 4: Get to Work. These workplaces are not rabbit holes and the Sim(s) must be directed to complete certain tasks in order to progress in their career. As with career tracks, a Sim must gain experience to advance.

Sims with a profession are paid a stipend per week. Although this seems like a small amount, it is only the base pay. E.G.: If a firefighter goes to work on time they will get their weekly pay at the end of the week. But, if the firefighter tends to a fire, they will earn more money which is given to them after or while fighting a fire; thus they will earn both a base weekly pay and extra money by doing jobs, or in a firefighter's case, tending to fires etc.

Sims earn promotions primarily by having the correct skills and enough family friends. The number of family friends they need and the skills they must have are highlighted on the job panel. Still, there are other things which are important when it comes to getting a Sim promoted.

In some career tracks, getting a promotion may result in a Sim being scheduled to work twice in one day. In The Sims, the Sim can miss the carpool for that second time without penalty. In The Sims 2, missing the carpool for that second time can result in a warning, and a drop in job performance. In The Sims 3 the Sim gets a day off if their new schedule would normally require them to work twice in the same day.

In The Sims 2: FreeTime, the required number of family friends can be reduced by befriending a Hobby Instructor related to the career a Sim is working in. This benefit, however, does not apply to the whole household, but only to the Sim who is friends with the instructor. Sims can also purchase the Friends in High Places aspiration benefit.

In The Sims 2, career tracks added in University require building four skills, while all other tracks require building three. This reflects the fact that Sims no longer have indefinite time in which to learn skills.

In The Sims 2, a chance card outcome that adds skill points may cause a Sim to reach the skill levels needed for promotion during the workday. If this happens, the Sim may be promoted if he or she meets the friends requirement and has sufficient job performance.

If a Sim's job performance drops too low, he or she may be demoted. In The Sims 2, Sims may also get demoted if they have a low aspiration level or lose too many skill points. In addition, some chance cards in The Sims 2 can result in a Sim being demoted or even fired. Sims who are demoted or fired will have a major drop in fun and social and spend a real-life minute moping by the pavement. They will also get a bad memory and autonomous reactions will occur in which the Sim will start crying and thinking about the demotion throughout the day. If it happens due to a chance card, the Sim will come home immediately.

In The Sims and The Sims 2, Sims who've been demoted get paid for that day's work at their new job's rate.

In addition, with The Sims 4: Romantic Garden Stuff pack, Sims can get demoted if their attempts to wish for a career promotion through the wishing well backfires. This more likely happens if a Sim wishes while the well is in a mischievous or a deadly mood.

Sims that fail to go to work on a regular basis, that have continually low job performance, or that receive a negative chance card outcome, can be fired from their job. Fired Sims immediately return home, without pay, and become unemployed until they find a new job. Getting fired is often a fear for Sims, and can negatively impact a Sim's mood or moodlets.

In The Sims, Sims will be fired after missing two consecutive days of work. If Sims miss one day of work, they will receive a warning over the phone.

In The Sims 4, fired Sims can reapply to the career they were just sacked from at anytime and they do not necessarily start from the bottom ranks. Sims in this case will usually start one rank below the position they previously held.

In The Sims 2, any time a Sim is at work (or sometimes school for children or teens), they can encounter a chance card. Chance cards encountered at work describe a predicament or situation which requires the Sim to make a decision. The player can choose one of two options (or press ignore) to complete the scenario. Ignoring the card has no effects, but each of the other choices has two possible outcomes. In general, one will be positive and one negative, though for some choices, one outcome will be neutral. Which outcome will occur is randomly determined, but which is more likely varies from card to card. However, one of the aspiration benefits available in The Sims 2: FreeTime is Business Instinct, which gives the Sim an 80% chance of getting the better outcome for the choice that was made.

As Sims progress through their careers in The Sims 2, they eventually earn a Career Reward Object. Career Reward Objects may let Sims learn skills at a faster rate, or may have other benefits. Unless Nightlife or later is installed, Sims who move will lose any Career Reward Objects on their lot, and will have to earn them again. The inventory feature added in Nightlife allows Sims to take reward objects with them when they move, so long as players remember to place them in inventory before moving the Sims.

The Sims 4 has many more career rewards, and some are unlocked as soon as level 2 of a career is reached. They usually provide an Emotional Aura based on the optimal Emotion for the career.

Pay raises come with promotion in all the games, but in The Sims 3, pay raises don't end once a Sim reaches the top of a career. Each time a Sim's performance meter fills, the Sim gets a pay raise.

As long as a Sim has at least one full day of paid vacation, they can miss work without penalty, and will get paid one hour before they normally get home from work. Sick Sims can use their vacation time as paid sick leave, and will get paid as soon as they have called in sick. Therefore, if a sick Sim has a day of paid vacation time, the only reason to have them call in sick is to keep the carpool from coming and keep the autonomous "Go To Work" action from appearing. A Sim who changes career tracks will lose all the paid vacation time they have accumulated.

In The Sims 4, Sims start with 3 days paid vacation, and earn more per day they work. Sims will also get whims to "Take Vacation Day" from time to time, or if The Sims 4: Outdoor Retreat is installed, a whim to "Travel to Granite Falls". Travelling to Granite Falls will be considered paid time off up to the accumulated amount.

In The Sims 2, The Sims 3, and The Sims 4, Sims that are holding a career may choose to retire once they become an elder. Elders are not required to retire, and may work full-time up until they die. The Sim will keep earning their full pay as an elder until they call in and retire. After this, they will still get some money (exactly 28.5714286% of their salary, in The Sims 2 approximately 50%) at the end of each day in the form of a pension, but it is not as much as if they were still working. In The Sims 2, if they choose to retire from a full-time job, an elder may not get another and will only be able to acquire part-time jobs for the duration of their lifetime. In The Sims 3, elders can get another full-time job after retiring, but they will not be able to retire from their new job or receive the pension from their previous job.