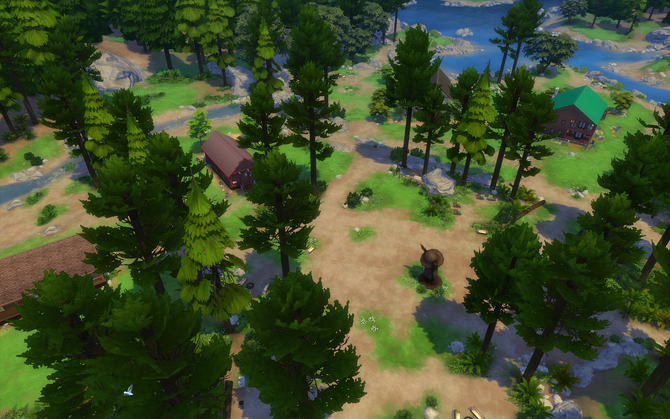 Campground is a neighborhood in Granite Falls, the sub-world introduced in The Sims 4: Outdoor Retreat. Visitors first arrive in the campground neighborhood when starting a vacation and are able to set up a tent and a camp, or they can stay in various pre-built cabins for a more comfier experience. Sims arriving here will have only what they carry in their inventory, and will need to procure additional supplies from a ranger station. Tents, food, campfires, tables and chairs can all be purchased here, alongside other necessary objects for a good vacation.

The campground consists of five rental lots, four of which are pre-built cabins. The fifth one is small and empty with a few objects, offering a good place to set up a camp. The player is also capable of editing these lots how they like without using cheats, such as changing lot assignments or editing the build itself, as long as Sims are not vacationing in them.

The area surrounding the campground is quite big with lots of room to either walk, jog, or hike around. It is surrounded by pine forests and a large lake, which includes a few fishing spots. Various picnic benches and barbecues alongside campfires are scattered throughout the neighborhood as well, allowing for great places to cook food in. In the center of the campground there is a large wooden statue that is the mascot of Granite Falls. Sims can view the wooden statue like any other decorative objects, but if a Sim has reached level seven in handiness, they can learn the schematics of the mascot and make a smaller version of it with the woodworking table. Near the mascot statue there is also a small community garden, with a few potatoes and carrots.

Park rangers also roam around the campground area and give advice on some features of the neighborhood. In addition to the park rangers, Sims wearing a bear costume can also be found here. If a tourist Sim encounters the bear they will gain a tense moodlet.

Campground is the only lot in the neighborhood specifically made for camping. It includes a picnic table with a grill, a horseshoe pit and a campfire. However, the campfire does not include any chairs, so the player has to bring their own or buy one from a ranger station. It is the only lot that does not have any sleeping related objects, or a bathroom. Luckily, however, a toilet stall is located very close to this lot. It is also the cheapest lot in the neighborhood.

Lakeside Retreat is the most expensive rental lot in the neighborhood, both in lot value and cost of rent. It is a two-story building with four bedrooms, all having somewhat expensive beds, and three bathrooms with moderate toilets and showers. The house has a huge open kitchen and living room, with a fireplace and a small radio. A small terrace is also located on the first floor and a big terrace on the second floor. In the backyard, there is a horseshoe pit and a campfire for Sims to tell stories and roast marshmallows or hot dogs. The only electronic objects in the house are two radios, one located in one of the bedrooms with the other one in the living room, which seemingly prompts the player to have other ways to entertain their Sims.

Forest Hideaway is a big and the second most expensive lot in the neighborhood. It includes two bedrooms with quite uncomfortable beds and two bathrooms. A big open kitchen and living room is located downstairs, with a fireplace and a cheap television. A small terrace located upstairs also includes a game table, while a terrace downstairs has a small table and a portable cooler. The backyard includes a horseshoe pit, a barbecue and a campfire.

Riverside Retreat is a small one-story house designed for at most two Sims. It features one bedroom and one bathroom. There is also an open kitchen and a living room, with a small cheap television and a cheap fridge. The kitchen does not include any stoves, so Sims have to cook their food by using either a barbecue located in front of the house or the campfire in the backyard. Outside there is also a horseshoe pit and an outdoor shower, alongside a game table and a portable cooler in the front porch.

Green Getaway is another small one-story house also designed for at most two Sims. It is basically a more expensive version of Riverside Retreat, as it includes pretty much the same features: one bedroom and one bathroom with an open kitchen and living room, that include a cheap television and a cheap fridge. There are also no stoves either, which forces Sims to cook by using a barbecue or a campfire, both of which are located outside. The backyard also includes a horseshoe pit and a portable cooler, while a game table can be found on the front porch. However, unlike in Riverside Retreat, Sims do not have to shower outside and can use a bathtub located inside.

Add an image to this gallery
Retrieved from "https://sims.fandom.com/wiki/Campground?oldid=879656"
Community content is available under CC-BY-SA unless otherwise noted.