Calpurnia Caesar was the wife of Julius Caesar. Together they had a son Octavius who went on to marry Scribonia Capp. However, Calpurnia and her immediate family died before the beginning of The Sims 2. She is the grandmother of Contessa Capp, and the great-great grandmother of Tybalt, Juliette and Hermia Capp. According to Calpurnia's SimDNA in SimPE, her hair was blonde before it turned grey. Oddly when resurrected she comes back with slightly different braids than the ones her head-shot shows, and they can only be accessed in CAS debug mode. Calpurnia is buried in the cemetery at the Capp Manor. Even though she died long ago, she is completely resurrectable. She died of old age.

If Calpurnia is resurrected and aged down to an adult, she has what appears to be a really long bit of skin dangling from her chin. Apparently it is part of her mouth. It is unknown how she came to have this oddity though it is most likely a glitch. Cleopatra Capp also has this oddity. If player chooses to age Calpurnia down to an adult, and make her have more children, if any of them inherit Calpurnia's mouth, their mouths will be on their foreheads when they age into adults. However this glitch is only visible on females. Males will have mouths in the correct part of their face.

She looks very similar to Priya Patel, but with different skin color and a slightly different hairstyle. Oddly Calpurnia has a hidden Grow Up aspiration token when viewing her character data in SimPE. While she is fat, Calpurnia's fitness bar implies that she is supposed to be fit.

Calpurnia has no memories of her husband, and although she has the memory of doing WooHoo with Mystery Sim, she doesn't have the memory of Octavius' birth. So basically apart from the WooHoo memory, she only has Create a Sim memories. 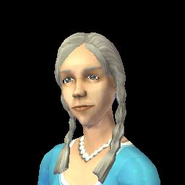 This is what Calpurnia's female offspring glitch looks like

Retrieved from "https://sims.fandom.com/wiki/Calpurnia_Caesar?oldid=901766"
Community content is available under CC-BY-SA unless otherwise noted.