Caliban Capp ( /ˈkælɨbæn kæp/) (né Gale) is a pre-made deceased Sim featured in The Sims 2. He was the son of Prospero Gale and Sycorax Gale, the husband of Cordelia Capp, and the father of Tybalt, Juliette, and Hermia.

During his lifetime, Caliban resided in Veronaville, one of neighborhoods that shipped with the game. His early life is unknown as he has no memories. He was a Fortune Sim, but had much larger part of raising his children than his wife; he taught them both the walking and talking skills. Caliban died in a fire along with his wife, possibly casualties in the feud between the Capps and the Montys. After his death, his three children were taken in by Caliban's mother and father-in-law, Consort and Contessa Capp. He is buried at the Capp Manor.

When Caliban is resurrected, his appearance will be randomized, but he won't have a corrupted face if he changes appearance. If he is aged up or down, he will have the 16th face template (with a slightly customized mouth) which is the one seen in his elder thumbnail. This can be fixed with Dr. Vu's Automated Cosmetic Surgeon. Even though his thumbnail shows him with brown eyes, his eyes are actually green.

Like several other pre-made deceased Sims in Veronaville, Caliban has no eyebrows. The reason for this is because he has a corrupted face. He has a second unused thumbnail hidden in his character file. It shows him as an elder with an unused hairstyle which is similar to one that Mortimer Goth has in The Sims. This thumbnail also shows the face that he will get if he changes his appearance at a mirror. However this may not be the case if he is not aged to a different life stage, or Dr. Vu's Automated Cosmetic Surgeon has not been used to purge his facial structure.

It is possible that Caliban was meant to be playable, as he recognizes his sister-in-law's children as family and vice-versa, which is impossible without editing, as he is a relative by marriage. Another hint towards this is his NID which shows that he was the 4th Sim created in Veronaville, along with his wife and the rest of his family (living Sims are usually created first, and their dead ancestors are created afterward). Caliban was 1 day from being an elder when he died by fire, according to SimPE.

Caliban with his wife and children.

Caliban's original appearance in TS2. This is Caliban's proper facial structure which will show up once he is aged up, or Dr. Vu's Automated Cosmetic Surgeon has been used to purge his facial structure. 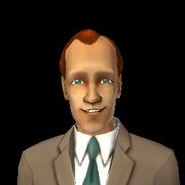 Caliban with his genetic face and eye color. 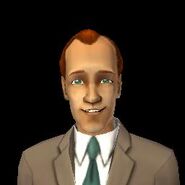 Caliban's intended appearance in The Sims 2 based off of hidden images.