The Sims Wiki
Register
Don't have an account?
Sign In
Advertisement
in: Services, Types of NPCs, Butlers,
and 4 more
English 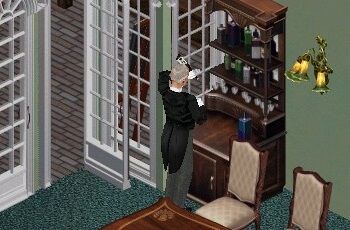 Alfred the Butler pouring a drink in The Sims: Superstar

A butler is an NPC who appears in The Sims: Superstar, The Sims 2: Apartment Life ,The Sims 3: Late Night and The Sims 4: Vintage Glamour Stuff. Sims can hire them by using the telephone. They are similar to the maid, but have the potential to replace all basic services.[1]

They do various chores such as:

Butlers are first introduced in The Sims: Superstar. The only pre-made butler is Alfred, and he charges §500 for one day. However, his day lasts from approximately 7am to 11pm.[2] His dress consists of a black tuxedo, gray trousers and white gloves. He has gray hair, light skin, and appears to be elderly.

He will activate Servo as needed, but will ignore Bonehilda's closet. If Servo is not present, he will call the repairman as needed. He may also call the maid and the gardener, though he will also do cleaning and gardening himself. He will feed the fish in the Poseidon's Adventure Aquarium. He will fill pet food bowls, though he will not recognize custom bowls.

The following interactions are available:

Butlers are included in The Sims (console). The butler is in the form of a monkey. It costs §20 to call him out of his tree dome, where he returns to after he finishes cleaning the house. He can be called out at any time of the day or night. He will clean the house, repair broken objects, and very rarely massage other Sims. He can be dismissed while on the job. He can be used in Get a Life, to help the player complete goals at Reality Bites, or any time the player wishes. His tree dome costs §15,000.

The butler returns in The Sims 2: Apartment Life. Sims can hire a butler to do all those nasty chores they don't want to do themselves. That description alone makes him sound no more interesting than the maid, but the butler is so much more than that. First of all, he walks over at around 7am and stays until 8pm, even if there is nothing for him to do. This way, he'll immediately respond to any little dirty dish or moldy bathtub that pops up.

The butler is more than just a super-maid. For a base fee of §20, plus §25 per hour,[3] he replaces the gardener, repairman, maid, and nanny as well, so having him is very useful. In fact, when initially hired, the butler blatantly says that he's better than them and asks the player's permission to just fire them all and be done with it, so Sims won't have to worry about that.

Work that a butler can do includes washing dishes, making beds, and scrubbing toilets, bathtubs, and showers. He will also take out the trash, and clean the fishtanks. The butler also does repairing. He will be able to repair any items, from a clogged-up toilet, to a broken plasma TV. This can be useful when items break late in the afternoon or in the evening, since the Sims will not have to wait for the normal repairman to the next morning. Finally, he does the gardening. He will pluck the weeds, water the plants, and trim the hedges. This is quite useful if a garden requires daily attention, since the normal gardener only comes every three days. Players should note that the butler can become a PlantSim.

For jobs that he cannot do, he will call the appropriate service. For example, he cannot spray or stomp roaches, nor can he go get groceries. However, he will call the exterminator or for groceries to be delivered. If he orders groceries, the player will be prompted for the amount to buy.

The butler has a couple of other perks as well. He'll cook light meals, but he'll do so intelligently: he only does it if the Sims on the lot are all hungry and there's no edible food served anywhere. Spoiled food with green whiff clouds and flies isn't going to be accepted as food.

He can be given one of three door policies; he can either greet all visitors so they immediately make themselves at home, deny all visitors so the family maintains privacy, or not answer the door at all and leave the decision to the player. Changing his door policy is an immediate command, so Sims won't have to walk all the way over to him to give him his orders.

The butler also replaces the burglar and fire alarm. He will immediately phone the police if he spots a burglar on the premises, or phone the fire department if he spots a fire.

All this work comes at a price. In practice, he is likely to be more expensive than the maid, gardener, repairman, and nanny combined, considering that he is paid to be present if needed, even if there is nothing for him to do at any given moment. On the other hand, maids, gardeners, and repairmen leave when there is nothing more for them to do, gardeners don't come every day, and repairmen are hired as needed. Because of this, a new family with a small house is practically wasting cash on him, but rich families with large houses or busy houses will greatly benefit from his presence.

Some butlers can be annoying, as sometimes a butler will prepare food even when most Sims are already well fed. He may also slack off and prepare simple, easy-to-make foods. If made selectable and the food preparation action is canceled, he will start to cry.

If there are babies or toddlers in the house, he will feed them, change their diapers, and let them out of their cribs. If their parents are working, he can be left alone with children, so there is no need to call a nanny either. He will also clean up bottles. If there are babies or children in the house, and they need taking care of, he tends to neglect his other duties to care for them.

When fired, a notification will pop up with an endearing farewell.

These butlers have their names randomized when the Magic sub-neighborhood is created. Their names are only referenced in the game files.

Butlers returned in The Sims 3: Late Night.[1] It is the first game of the series where butlers can be female. Butlers cost §1200 a week or §171 a day (§46 higher than a maid, the rate for a maid is §125 per day). Butlers will sleep in a Sim's house, so make sure that they have a spare bed! To assign a bed for the butler, click on the desired bed and set it as the butler's bed. The butler has level 10 in both Cooking and Handiness,[4] though Camilla Fortescue, one of the pre-made butlers in Bridgeport, does not follow this rule, having a different range of skills. A good relationship must be kept with the butler or they may leave. There are some known glitches with the butler. When arriving at a house, the car they have arrived in often becomes stuck outside the front of the house even when the game is reloaded. At times, they may become invisible, though this is temporary. They may also sometimes leave after a week when they get paid but can be rehired. Butlers must be paid every week.

In addition to these dialogue options, Butler are also capable of attacking and repelling burglars, calling the fire department, putting out fires and if there is no more tasks around the house the butler will take care of their own needs such as showering or eating, all of which is done autonomously.

A common problem is that, if the butler makes food, the entire household and guests will stop their current actions to eat—and butlers may cook autonomously. If there is a small kitchen area and a large family or many guests the area will become crammed. This is why it is a good idea to have parties in between breakfast and lunch, lunch and dinner, or dinner and breakfast. Another alternative is to make the kitchen quarters larger. This issue, however, was partially fixed later on with a patch that removed the Butler's ability to cook autonomously.

Butlers can be interacted with the same way as other Sims. It is possible for a Sim to carry out a romantic relationship with their butler and even try for a baby. However, if a male Sim tries for a baby with a female butler, the baby would live in his house as long as the butler resided there as well. This also applies to regular maids.

Butlers return in The Sims 4: Vintage Glamour Stuff. They are hired through the phone under the "hire a service" option for a §175 payment along with a §12/hr maintenance cost weekly. Butlers are randomized NPCs with random appearances and traits; their traits dictate how well they will work as a butler.

Butlers must have an available bed as they will be living on the residential lot where the Sim hired them. Players can claim any unclaimed bed for the butler. Butlers will stay on the lot permanently until they are fired, dismissed, quit, or die.

Sims can interact with the Butler just like any other Sim, even romancing them. However, butlers will not join a household as a player-controlled character until dismissed.

Butlers will do these few autonomous interactions and set tasks by other Sims: