The Sims Wiki
Register
Don't have an account?
Sign In
Advertisement
in: Burglars, Services, The Sims 2,
and 3 more
English 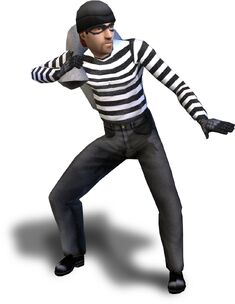 The burglar is an NPC featured in The Sims, The Sims 2 and The Sims 3 who will sneak onto a lot, most often during the night, when Sims are sleeping, and attempt to steal items from the household.

In The Sims the burglar, known as "Some Sneaky Sim", was male. In The Sims 2 and The Sims 3, burglars can be either male or female.

Burglars will steal possessions of any size, often choosing the most valuable items of the lot. Burglars can be arrested by the police, if they are summoned quickly enough. Additionally, the only way to ensure the police arrive in time to catch the burglar is to install a burglar alarm.[confirmation needed] If the lot doesn't have an alarm, Sims can still call the police, who may not arrive in time to prevent the burglar from escaping with the Sim's possessions.

In all featured games, it is impossible to enter build mode or buy mode without cheats once the burglar enters the lot.

In The Sims, burglaries are fairly rare and will most likely appear if the selected family is wealthy or has expensive objects in their home. The burglar will usually appear at around 3:00 AM, and even appear as late as 9:00 AM if the family is sleeping, and his arrival will be announced by a few bars of intentionally frightening music. The burglar cannot be interacted with in any way, except by the police, and was specifically designed to rob houses while the entire household is asleep. If the player tries to wake up a Sim while there is a burglar, it is unlikely that the Sim will wake up, get to a telephone, and call the police in time to catch him. Even if the player does this as soon as the burglar appears, it is not certain that the Sim will be able to call the police in time. This is most likely because the game has programmed burglars to only appear when a Sim is asleep. This can further be proven during rare occasions when a Sim is awake while one arrives on the lot; Sims cannot directly stop the burglar as there are no available interactions, and they will not react to one at all.

Burglars will steal the closest and most expensive objects they can find. Installing a burglar alarm in the home will not prevent a burglar from entering the lot; however, if one happens to do so, the police will arrive shortly after the alarm goes off to arrest him, where he will surrender peacefully. The police officer will thank the family and will pay them a §1000 reward. Despite this, the burglar may have already taken one or two items by the time the police officer approaches him. These items will be taken as evidence and not returned, but the family will be reimbursed for them. Sometimes, a family will be reimbursed for an item that the burglar did not manage to steal.

In The Sims 2, a burglar who enters a lot will "case" the house and lot, looking for the most expensive items. A burglar can steal aspiration reward objects, and will consider the number of aspiration reward points needed to buy the reward as its value. Their arrival is announced by a "stealthy" tune.

If the burglar trips an alarm, this may give the police time to respond before the burglar can steal anything. Unlike The Sims, Sims will panic when they witness a burglar entering a lot. They can use a phone to call the police, but cannot interact with the burglar. Even if the burglar is captured before taking anything, all Sims on the lot will also receive the "Burglar!" memory, unless they have received it previously.

With Open for Business, Sims with a Silver or Gold Robotics Badge can use the Robot Crafting Station to craft SentryBots, which are designed to patrol a house and shock any burglars that may enter with an electric current, causing them to run off the lot. However, if this happens after the burglar has stolen something, it will still be necessary to call the police.

Something that is useful to have in mind is that, on rare occasions, the player can immediately go to buy mode or build mode if the burglar has just entered the lot and the game has not picked up on it. This can be very helpful if it can be managed, but it is not something that should be counted on. In most cases, there will be a short pause right before the burglar arrives. This can also help determine when the burglar is about to arrive.

NPC burglars may appear on community lots, and in Open for Business, may visit an owned business. While they will likely be dressed as burglars, they may be there to shop, not steal.

In college sub-neighborhoods, burglars may appear in residential lots or Greek houses.[TS2:U] Burglars may also appear on apartment lots.[TS2:AL]

For around 24 game hours after a burglary attempt, Sims may interrupt what they are doing to sigh, or even cry, about it. This can happen even if the burglar was captured and nothing was stolen. If this autonomous reaction is pushed on a sleeping Sim with a full Energy bar, the Sim will wake up.

Pre-made burglars in The Sims 2[]

In The Sims 3, burglars can be interacted with while on the job, which was impossible in previous games, though the options are very limited. Sims now have the power to stop them if they have the Brave trait or have the Can Apprehend Burglar hidden trait, which gives them the option to "Fight" against the burglar. Winning against the burglar will force them to return the stolen items to the family inventory before leaving. Also, a pet with the aggressive trait can chase the burglar away. If the police were called, they may reward the Sim with some money for helping them catch the burglar. Their burglars’ arrival is announced with a spooky tune.

Burglaries are more common if a household possesses a large house with lots of expensive objects. They may also occur in vacation homes[TS3:WA] and penthouses.[TS3:LN] Although rare, burglars may sometimes appear when no Sims are at home. Burglars may enter through back doors, if there is one, and can pass through locked doors.

Sims will panic at the sight of a burglar on the lot. Unlike previous games, burglars will freak out when a burglar alarm goes off and become stunned, giving the police more time to arrive.

Playable Sims can also become burglars if they choose to become a thief through the Criminal career track, though this does not allow them to rob other houses. However, it is possible for any Sim, regardless of career track, to steal items if they have the Kleptomaniac trait, which allows a Sim to take three items from a residential or community lot that he/she is visiting at night.

Like The Sims 2, it is possible to befriend burglars and turn them into playable Sims by becoming acquainted with them. The easiest way to do this is by inviting over another NPC’s "household". Another possible way to do this is for a Sim to help them escape after being handcuffed by the police. Usually after making an arrest, police will tell the burglar to wait outside the police car while they check around the house. During this time, an option called "Set Free" will be available on the burglar, which will grant the Sim a positive relationship boost with the burglar. Sometimes, burglars may visit the town park in their distinctive uniform alongside other NPCs, where they can be interacted with freely for a period of time before they leave and become unavailable again. Another way is through the "Fight" interaction also available to Sims with the Brave trait or the Can Apprehend Burglar hidden trait. Afterwards, the burglar will become acquainted with the Sim allowing the player to call the burglar to have a chat or invite over to their house on days when they are not working as burglars. They can then ask them to move or marry into the household once they have built a high enough relationship. Burglars who have become playable Sims possess a hidden trait called "Burglar" which gives them the special interaction to Sneak when moving. Children who are descended from Burglars can inherit this trait.

There are many ways to counter a burglar in The Sims 3: