The Bunch family is a pre-made family in The Sims 3 who resides in Sunset Valley. The family consists of Jack Bunch, his wife Judy and their four children Ethan, Lisa, Arlo and Darlene. Their last name is perceived to be a reference to the television show "The Brady Bunch". They live on a house called "Peep's Peak" at the address 16 Maywood Lane.

The Bunches seem to have a bit of a dramatic life. Jack is an outgoing military man who likes to barbecue and Judy is a hard working scientist who doesn't have time for hobbies or working out. She was once thin, but after 4 kids and many months of pregnancy cravings, she became obese.

Ethan, the oldest, is very popular at school and has a great relationship with all of his siblings, including Lisa. He is very good at school as well. Lisa is the second oldest who seems to be the opposite of her older brother. She is mean, gets into fights and steals things, making her the troubled teenager. She is good friends with VJ Alvi and may have a crush on him.

The third oldest is Arlo, who is extremely hyperactive and athletic and loves to play sports. He is very good friends with most of his family members, except his younger sister Darlene who picks on him. They have a horrible sibling rivalry, but Darlene may only be doing this because she wants attention from her parents. She has broken her bones to get their sympathy and is extremely brave and is a daredevil.

Strangely, Jack and Judy have brown hair, but all their children are light blondes. This is either a developer oversight, or they inherited their hair color from an earlier generation.

Bunch: A number of things, typically of the same kind, growing or fastened together. Their last name is hinted to be a reference to the 60's sitcom The Brady Bunch. 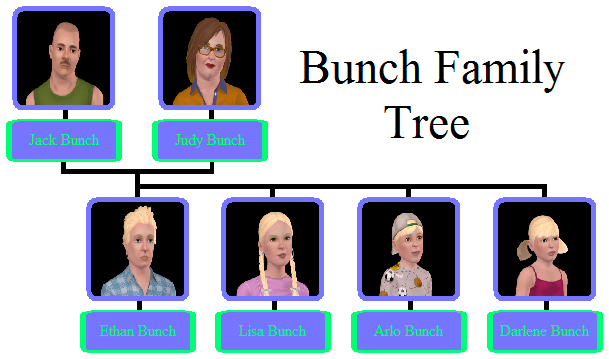 This large, three-story family home includes a guest bedroom on the first floor and an ultra-private bathroom on the top floor. The expensive yard includes a patio perfect for summer grilling.

Retrieved from "https://sims.fandom.com/wiki/Bunch_family?oldid=916006"
Community content is available under CC-BY-SA unless otherwise noted.