The Sims Wiki
Register
Don't have an account?
Sign In
Advertisement
in: Objects, Objects in Eco Lifestyle, Objects available in build mode (The Sims 4),
and 12 more
English 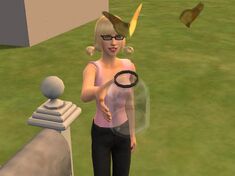 Bug collecting is an interaction first introduced in The Sims 2: Seasons, allowing Sims to catch butterflies and fireflies. The Sims 2: FreeTime allows Sims to catch bugs and add them to a collection. In The Sims Castaway Stories and the DS version, it is possible to gather bugs, which can be eaten, traded, or kept and collected. The Sims 3 also features collecting butterflies and beetles. The Sims 3: Into the Future features robotic bugs called nanites. In The Sims 4: Outdoor Retreat, bug collecting reappears once again in the vacation world of Granite Falls. In The Sims 4: Eco Lifestyle, bug collecting comes in a new form of composting and the consumption of home grown insects.

This section describes features that are only available in The Sims 2: Seasons and The Sims Castaway Stories.

A Sim may have wants to catch butterflies or fireflies, but the want will not be fulfilled until the Sim actually catches one.

Toddlers can chase butterflies or fireflies, but cannot catch them. With Freetime, they gain nature enthusiasm from doing this.

This section describes features that are only available in The Sims 2: FreeTime.

There are three types of bugs a Sim can catch: beetles, butterflies and spiders. To have a Sim catch bugs, the player has to click on outdoor terrain and select the "Hunt Bugs" interaction. Sims will continue this action indefinitely but will not always catch anything. Once a Sim catches a bug it will be placed in their collection box, which can be found in their inventory. Players can view the collection by placing it on the lot and selecting "View". When Sims go hiking, they might catch a bug. If they already have that bug in the collection, they'll release it. A Sim must have at least level 8 enthusiasm in the nature hobby to be able to collect all of the bugs.

A Sim with nature enthusiasm may have a want to hunt bugs, but the want will not be fulfilled until the Sim actually catches a bug.

If a Sim hunts bugs for very long, it will have a strong effect on their hygiene. If a PlantSim hunts bugs, it will affect their water motive. Occasionally, a Sim who is hunting bugs will be chased by bees.

Butterflies, beetles, and nanites appear as collectibles in The Sims 3.

A Sim with the red admiral butterfly. 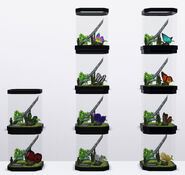 Nanites are robotic bugs featured in The Sims 3: Into the Future and they can be found in Oasis Landing. Nanites are essential components of some, but not all, trait chips, and some advanced chips require specific nanites

Unlike butterflies and beetles, Sims can design and create nanites; doing this requires Reventlov's Bot Workshop. Designing and creating a nanite increases the bot building skill. Nanites can also be reverse engineered. Reverse engineering a nanite lets a Sim learn how to design it, and may yield empty processors.

Insect collecting returns in The Sims 4: Outdoor Retreat and works similarly to The Sims 3. Sims can collect different types of insects and then have them as decorative items (giving +3 environment score), or sell them to gain more Simoleons. Sims can also roast insects over a campfire, or prepare shish kebabs or gumbo with them on a grill. Another way to consume insects would be combining them with plants to form herbal remedies through the use of the herbalism skill. Insects can be only found in Granite Falls, though some are exclusively spawned in the deep forest areas of the world such as Hermit's House or the Granite Falls Forest. Insects can also appear at different times of the day or night and some are exclusive to either of those time periods. The collection can be quite difficult to complete due to the high number of common insects and the time-of-day mechanic.

Insects can be spotted on the ground or in mid-air. A lot of them may be quite hard to track down at first as they can blend in with the environment, but catching them should be easy. A good way to spot a group of insects would be to keep the camera near the ground level on normal time speed. Pausing the game may not be beneficial, as the insects may be even harder to see when standing still. Fireflies will glow during the night, making them more easily recognizable. When a Sim tries to catch an insect, there is a chance that the insect will bite, giving the Sim an uncomfortable moodlet.

After collecting all the insects the player receives the "Entomologist Delight" award, which is a plaque that can be hung on a wall. Collecting all 21 insects alongside the five fish added in Outdoor Retreat in Granite Falls will also unlock the "Critter Catcher" achievement.

In The Sims 4: Eco Lifestyle, Sims can farm their own insects. Insects will need to be fed and nurtured. Sims can collect Bio Fuel and insects for food every 24 hours. Occasionally, insects will produce Super Fertilizer.

All meals produced from insects are unsuitable for vegetarians.