The Sims Wiki
Register
Don't have an account?
Sign In
Advertisement
in: Premade families, Families with 3 generations, Families from The Sims 2 (base game),
and 9 more
English

The Broke family is a playable family who appear in Pleasantview, the town shipped with The Sims 2, in Riverview, a town purchasable from The Sims 3 Store, and in The Sims 4: Get Famous. In most games, as their last name suggests, they are fairly short on Simoleons.

In The Sims 2, the Broke family resides in Pleasantview. It consists of Brandi Broke, widow of Skip Broke; Dustin Broke, a rebellious teen street hawker going steady with Angela Pleasant; and Beau Broke, a toddler who is not well learned in his essential toddler skills. When the household is played for the first time, the game provides the following instruction:

"Beau Broke is growing fast, and Brandi wants to teach him all the skills he needs to stay out of trouble. Click on Beau to teach him to Walk, and fulfill wants for both Sims."

When the family is first played, Brandi is pregnant with her third child from the deceased Skip. Brandi is also the daughter of Bob and Betty Newbie, a married couple that was introduced in The Sims. However, she does not appear in The Sims, likely because she hadn't been born yet at the time.

Octavia Broke is a homeless Sim who resides in Lunar Lakes. It is plausible that she is a descendant of the Broke family due to her surname and the fact that many other Sims in Lunar Lakes are descendants of other SimNation Sims. She, however, lacks the slob and party animal traits and appears to be of a different ethnicity. This could be possibly be, because she was married into the family, rather being a blood relative of them.

Dustin Broke is a homeless sim introduced as a celebrity in The Sims 4: Get Famous. He appears to be different from Dustin Broke from The Sims 2, as they have a different body type, eye color, and different age.

Unlike The Sims 2 and The Sims 3, he has a decent amount of simoleons.

Broke: "to become destitute of money or possession." 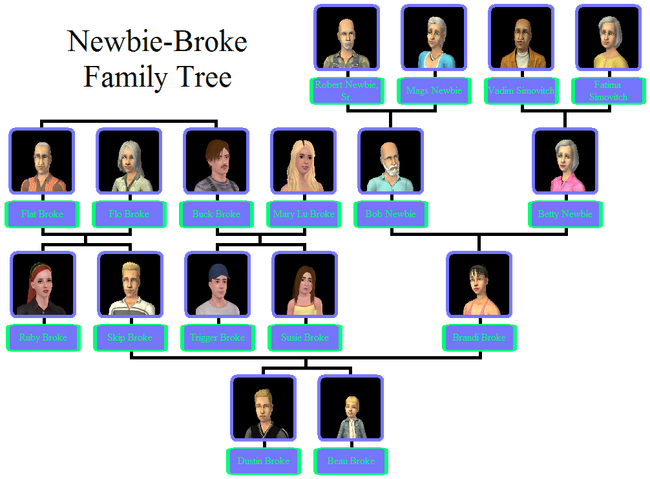