Brendan Patel is a pre-made science geek from Starlight Shores. He doesn't have any skills and relationships at the start of the game. He can be made playable by marrying him, or by befriending and asking him to move in. His female counterpart is Victoria Costialla.

He shares the same surname with Rajan Patel and Patrick Patel from Isla Paradiso, Rahul Patel from Barnacle Bay, and the Patel family from Belladonna Cove, although he does not appear to be related to any of them.

Unlike his co-workers from other neighborhoods, he does not have the computer whiz trait. 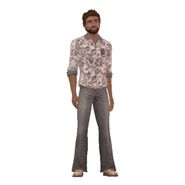 Brendan's everyday clothing
Add an image to this gallery
Retrieved from "https://sims.fandom.com/wiki/Brendan_Patel?oldid=914390"
Community content is available under CC-BY-SA unless otherwise noted.