Brad Burb is a pre-made Sim that appeared in The Sims: Unleashed. He is the son of Benjamin Burb and Susan Burb, husband of Tiffany Burb, father of John Burb, and grandfather of Lucy Burb.

Brad Burb is the middle-aged husband of fashion obsessed Tiffany Burb and the father of John Burb (originally known as "Johnny Burb" in The Sims). He is a nature-lover, unlike his wife, Tiffany, who loves fashion. He moved to Pleasantview to escape from the hustle and bustle of the city, which his wife Tiffany is still skeptical about. He has gray hair and wears a brown jacket over a dark purple shirt, with blue jeans and a pair of black boots. He is decently acquainted with his son and their dog, although his daily relationship score with his wife appears low, perhaps due to how different they appear.

He lives at 63 Gunther Goth Highway, a moderately-sized farmhouse with an orchard and a small garden, fitting his personality.

By the time the story-line has caught up to The Sims 2, both Brad and his wife have passed away. Their son, John, is married to Jennifer Burb (née Pleasant) and they have a daughter, Lucy, who is a child. Brad can be found on both John and Lucy's family trees.

His parents, Benjamin and Susan Burb, who were introduced in The Sims 2, seems to look like people from the South, and since Pleasantview's original appearance is meant to look like the South (when the town was named Old Town in the original The Sims, and the neighborhood theme is New Orleans), so it is suggested that Brad was born in Pleasantview or he was born in another rural area. Brad died around the time his son John was engaged to Jennifer, while his wife died a bit later around the time his granddaughter, Lucy, was born.

Though his character data was deleted, regenerating him with SimPE is a tad easier than most dead ancestors, as his facial features are seemingly identical to the 13th Maxis face template in Create a Sim, except for slightly raised eyebrows, unlike most "unresurrectable" Sims. According to Brad's SimDNA in SimPE, his hair was blond before it turned grey. According to his age data, he had 18 days left in the elder life stage when he died. Like most pre-made deceased Sims from The Sims 2, Brad is completely unplayable without the use of hacks or third party programs, such as SimPE. 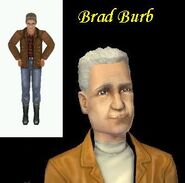