The Sims Wiki
Register
Don't have an account?
Sign In
Advertisement
in: Skills, Into the Future
English 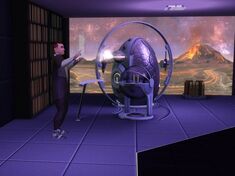 Bot Building is a skill introduced in The Sims 3: Into the Future. Increasing this skill enables Sims to make higher quality Plumbots and more advanced trait chips.

Sims can learn and increase Bot Building skill by using the Bot Workshop or by reading any of the 3 skill books for Bot Building. They can also take a class at the Bot Arena. A Sim can also register as a self-employed Bot Builder.

A Bot Builder is a tinkerer at heart who's capable of building everything from simple mechanical Nanites to complex Sim-like Plumbots. It'll take time and practice before (Sim Name) is ready to build advanced Plumbots, but even a novice can design or create Trait Chips and Nanites to get started!

Domo Arigato Mr. Plumboto
Earn at least §5,000 from performing Tune Ups. As a result, the Well Tuned moodlet will last longer after performing a Tune Up.
Micro-Master
Create at least 200 Nanites to become a Micro-Master. Once achieved, the cost of creating all Nanites is halved.
Chipping In
Chip in by discovering 21 different Trait Chip recipes. After chipping in, all purchases at the Bot Shop will be 25% off!

Trait Chips can be created at the Bot Workshop. They provide functionality to Plumbots and a Plumbot can be fitted with a maximum of seven trait chips.