Booker Singleton is a pre-made Sim living in Appaloosa Plains. He starts the game in the Political career track as a Campaign Intern, at level 3. In his inventory, he has a HS Diploma, Audio Lite Stereo, and a book (Zombies? Zombies!). He resides in the Render Farm with his brother, Rodney, and their horse, Glint 3.0. They have §50,000, along with a well furnished ranch when starting the game. He starts off the game with a rival, Tate Curley, who dislikes his ideals, and he may be one of the people badgering Tate about selling his land. Booker also has a pregnant ex-girlfriend, Imogen Pelly. 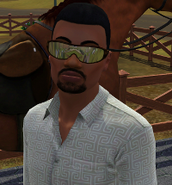 Add an image to this gallery
Retrieved from "https://sims.fandom.com/wiki/Booker_Singleton?oldid=830102"
Community content is available under CC-BY-SA unless otherwise noted.