The Sims Wiki
Register
Don't have an account?
Sign In
Advertisement
in: Sims, Female Sims, Adults,
and 26 more
English

Not to be confused with Skeleton.

Bonehilda is an NPC that was introduced in The Sims: Makin' Magic and later returned in The Sims 3: Supernatural and The Sims 4: Paranormal Stuff. The "Bone" in her name refers to her being a skeleton. Her name may also be a pun on Brunhild/Brunhilda, a powerful figure from Norse and Germanic mythology. She is considered to be the first skeleton in The Sims series even though skeletons were not made playable until The Sims 4: Jungle Adventure.

There are two versions of Bonehilda in the game. One is the janitor on the Magic Town lots A Spooktacular Spot and Vernon's Vault. The other can be bought on residential lots as a magical (and much cheaper) equivalent of Servo. This version of Bonehilda is literally a "skeleton in the closet".

If the "skeleton maid" version of Bonehilda is in her closet, clicking on the closet will give the "Knock" interaction. Selecting this will cause the selected Sim to go to the closet and knock on it, which will bring Bonehilda out to do chores. The selected Sim does not have to have magic to do this.

While the "skeleton maid" version of Bonehilda is generally equivalent to Servo, there are significant differences:

Things Bonehilda does that Servo doesn't[]

Things Servo does that Bonehilda doesn't[]

Bonehilda also has a few quirks. If a bar is present, she'll take a drink before heading back to her closet. Naturally, the drink will flow through her and leave a puddle on the floor. If tombstones are present, she may wave to one of them before going back to her closet. She is also a fan of the Grim Reaper, and will try to get his autograph if he appears while she's out of her closet. However, this action will prevent other Sims from pleading with the Grim Reaper, leading to the death of the Sim who he is reaping the soul.

Bonehilda made a comeback in The Sims 3 in The Sims 3: Supernatural, where she plays a similar role to the one she had in Makin' Magic. She will act like a maid, keeping the lot clean and cooking meals. She will also act like a babysitter/pet-sitter. While she will teach pets tricks, she can't actually take care of babies and toddlers, so she is not a good replacement for the babysitter. Should a fire start anywhere on the Lot, she will attempt to put it out. She stays inside the Bonehilda Living Quarters, which can be bought in the alarms section of buy mode, or the Miscellaneous area under Entertainment.

It seems she has been based on the Grim Reaper's coding, as aging her (via cheats) will result in a 100% black skin tone female Sim (with normal flesh and bones), just like the Grim Reaper's skin tone. She repairs broken objects and often gets electrocuted, which shows her as a singed Sim. This can be fixed by sending her back into her coffin and re-summoning her. Bonehilda will always have the same voice: Voice 2 with the lowest pitch. She also can never do the 'Try for Baby' interaction with other Sims without mods.

Things Bonehilda will do[]

Things Bonehilda will not do[]

Bonehilda returns in The Sims 4: Paranormal Stuff. This version of her does not come with a coffin in build mode. Instead, Sims with level 3 or higher in the medium skill can summon her using a seance table or a seance circle.

Like in previous games, Bonehilda can do normal tasks maids do such as cleaning, cooking and repairing at no cost to the household. After cleaning, Bonehilda will hang around for a bit and entertain herself, allowing Sims to get to know her. Bonehilda is very useful to have around while living in a haunted house, where she can help keep the place tidy and fend off ghosts while the residents are preoccupied with the house's spirits. If a Sim summons her while doing Paranormal Investigator gigs, she can act as a bodyguard to protect them from the evil ghost Temperance.[1]

Sims performing the "Ghastly Ritual" séance have a small chance of becoming Bonehilda for a temporary time.

Bonehilda appears human when she is nude, such as when cheats are used to add her to the household and make her shower or bathe. This, however, will fix itself as soon as she exits the shower/bathtub. Unlike most other fully "costumed" Sims, Bonehilda's human appearance is always the same. She has long red hair, green eyes, a light skin tone, and an average body type.

Things Bonehilda will do[]

Things Bonehilda will not do[] 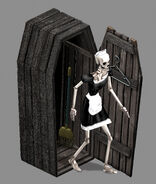 Bonehilda as a janitor in Magic Town.

Brigit the maid will freak out and quit if she sees Bonehilda in action.

Bonehilda taking a drink from the bar... 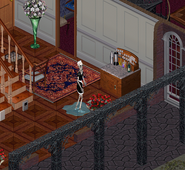 ...and leaving a puddle behind her. 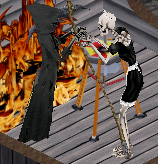 Bonehilda asking for an autograph.

Bonehilda's appearance in The Sims 3.

The Grim Reaper and Bonehilda.

The icon of a Sim's wish to buy Bonehilda's Coffin.

Bonehilda as a ghost.

Bonehilda with a baby.

In The Sims 3: Supernatural, a maid will still freak out and quit if they see Bonehilda.

A household visitor can also get freaked out when they see Bonehilda around. This includes paparazzi.

If the household has a dog, sometimes Bonehilda will get freaked out and run away from them.

Bonehilda beside her living quarters.

Bonehilda posing beside her living quarters.

Bonehilda in "human" form after being electrocuted. 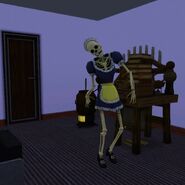 Zombie Bonehilda which was resurrected by a Witch's spell.

A reference to Bonehilda in The Sims 4. 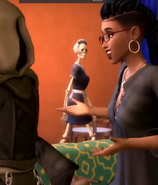 Bonehilda from The Sims 4: Paranormal Stuff.

Bonehilda admiring herself in a mirror.

The notification that appears when a maid quits from seeing Bonehilda.

Bonehilda at a seance table.

Bonehilda hanging out with Sims at a seance table. 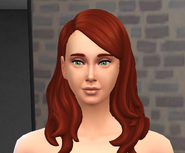 Bonehilda's human form in CAS, if her skeletal appearance is removed.