The Sims Wiki
Register
Don't have an account?
Sign In
in: Sims, Male Sims, Adults,
and 14 more

Billy Specter is a pre-made male Sim from The Sims 2 for console. He has 0 relationship points with nearly every pre-made Sim in Story-mode, and apparently has a very bad temper.

Billy was a bitter actor who once shot an intern. He died in an accident, and has enjoyed his life as a ghost (though that hasn't changed his mean spirit). He starts out in Sunset Canyon as a ghost.

Completing Billy's Gold Wants will unlock the bonus location to The Orbit Room.

Despite his surname being Specter, it's unlikely that he's related to the Specter family. 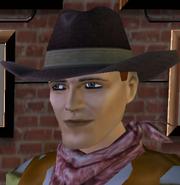