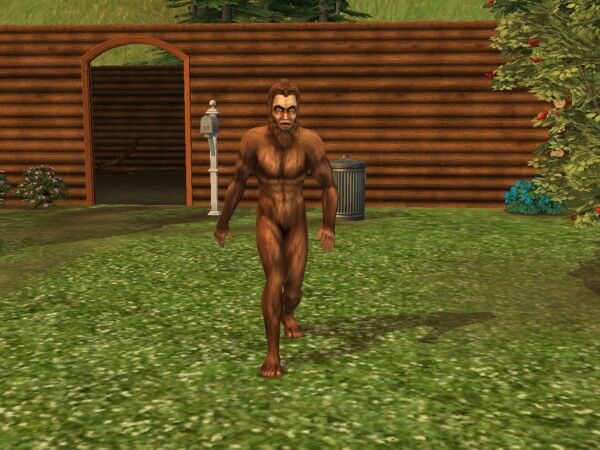 Bigfoot
A life state · Featured in: 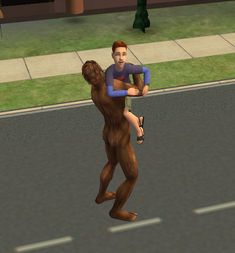 A Bigfoot hugging a child.

For the Bigfoot in The Sims 2 for Nintendo DS, see Bigfoot (Nintendo DS).

Bigfoot (also known as Sasquatch in some versions of the game) is a creature from The Sims 2: Bon Voyage that can be found on a secret lot in Three Lakes, one of the three vacation destinations in-game.

A Sim must first locate the secret location map for Hidden Burrow. This can be accomplished by digging for treasure, going on a hike, or raiding the captain's cabin on the pirate ship.

Once the map is found, Sims will be able to access the secret lot in Three Lakes. Bigfoot will be waiting on the lot, and can be interacted with like any other Sim. Sims can build a relationship with him, although he cannot be called over the phone if they leave the lot. Befriending Bigfoot will fulfill a vacation memento, and will provide the option to move him in. The option is not under the usual "Propose.../Move In" menu, but once a Sim has a high enough Daily Relationship and a few Lifetime relationship points, an "Ask Bigfoot to move in" interaction will become available. Once moved in, all Sims in the household will receive a memory of Bigfoot joining the family. While Bigfoot will become selectable on the hidden lot, he will not leave with the Sims' family immediately, citing the need to collect his belongings. He will appear by the mailbox when the family returns home from vacation.

A new Bigfoot is generated whenever one is moved in. A player could, therefore, collect several of the Bigfoot clan in a Sim's household.

Bigfoot walks differently from other Sims, and he hunches over slightly when doing so. He is also able to offer Sims a "Bigfoot hug", and Sims may roll a want of being hugged in this manner. Other than that, Bigfoot is like a normal Sim, with the same motives. Bigfoot can be used in a player-owned business or hold a regular job. Bigfoot has 10 points in all skills and gold badges in every talent.[1] Bigfoot has one default work uniform—a blue waistcoat and a small bowler hat—and will always go to work in that outfit. Almost every day, Bigfoot returns from work with a gift from his employers.[2] Bigfoot does not require friends to gain promotions, and because he already has maximum skills, Bigfoot only needs to show up to gain promotions. This means Bigfoot can easily become a great money maker.

While Bigfoot has the same needs as other Sims, he tends to them differently; Bigfoot will never autonomously take showers or baths, even when his hygiene is low. He will also eat constantly even if he is full. When his motives are critically low, he goes on a "rampage" of sorts, pounding his chest, yelling, breaking household objects, and using Scare, Fight, and Irritate interactions on other Sims. If Seasons is installed, he is impervious to cold weather but can get very hot, though he cannot become sunburned.

The only aspirations available to Bigfoot are Knowledge, Fortune, Popularity or Grilled Cheese; these are selected randomly when Bigfoot is generated. Bigfoot cannot use the ReNuYuSenso Orb or the ReNuYu Porta-Chug to change his aspiration. If FreeTime is installed, Bigfoot cannot select Family, Romance, or Pleasure as a secondary aspiration.

Bigfoot has a +5 relationship bonus with dogs and children, making him a good dog trainer or babysitter. However, cats are not too fond of Bigfoot, though it is still possible for them to maintain positive relationships.

Bigfoot cannot engage in any romantic interactions, meaning that Sims cannot fall in love or get a crush on him, and they cannot WooHoo with him; thus, it is not possible for Bigfoot to father his own children. He can be abducted by aliens, though he will not return pregnant. It may be possible for him to adopt a child, however.

Bigfoot also acts as a good deterrent for burglars; if one shows up, Bigfoot will immediately wake up and scare them away.

Bigfoot can become a zombie or a witch, but not a werewolf, vampire, or PlantSim. Sims cannot become a Bigfoot.

There is a hidden NPC named "Bigfoot Bigfoot" which can be summoned through the use of the Tombstone of Life and Death. When summoned, Bigfoot Bigfoot is simply an ordinary Sim with Bigfoot's appearance and thus does not have the same animations as the regular Bigfoots have. Bigfoot Bigfoot also lacks the ability to give "Bigfoot hugs" and can, unlike other Bigfoots, get married and have children. However, adding this NPC to the household is not safe and may cause corruption. "Bigfoot Bigfoot's" primary purpose is to provide a template for the game to create new Bigfoot characters. All Bigfoots that appear in-game are clones of Bigfoot Bigfoot, but Bigfoot Bigfoot is never seen in-game under normal circumstances.

Note
If Bon Voyage is not installed, but a later expansion pack is, Bigfoot Bigfoot may still appear when using cheat objects such as the Tombstone of Life and Death.

Warning
Adding Bigfoot Bigfoot to the household has been known to cause corruption. Try interacting with Bigfoot in Three Lakes as those Bigfoots are safe to play as. 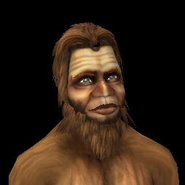 The Bigfoot Bigfoot NPC
Add an image to this gallery

Retrieved from "https://sims.fandom.com/wiki/Bigfoot?oldid=891628"
Community content is available under CC-BY-SA unless otherwise noted.