Bertram Plunkett is a pre-made butler who resides in Bridgeport. He has maximized his Cooking and Handiness skills. He doesn't have any relationships when he is first hired. He is recognizable from the monocle worn on his left eye. He can be made playable by marrying him, or asking him to move in. His female counterpart is Camilla Fortescue.

Despite his seemingly graying hair, Bertram is a young adult. 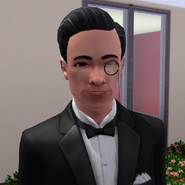 Bertram in-game
Add an image to this gallery
Retrieved from "https://sims.fandom.com/wiki/Bertram_Plunkett?oldid=899743"
Community content is available under CC-BY-SA unless otherwise noted.