Bernard ( /bɛərnəd/), also referred to in-game as Lord Bernard Escargot Shallot IV, is a pre-made, non-playable ghost, residing in Windenburg in The Sims 4: Get Together.

Bernard is a ghost who haunts the Von Haunt Estate alongside Mimsy, his fellow departed wife. He lived in the estate, prior to his death, with Mimsy, in an arranged marriage that then sprouted on love.

In the dining room of the mansion, a portrait of Lord Bernard can be seen, with a description that reads:

"Every country's got ther token loony ex-socialite failed artist ghost Lord, right? Well, Windenburg's got Bernard, at least. Swing on down to the Von Haunt Estate and you might catch a glimpse of him!"

A plaque in the same room contains the following information about him:

"The Late Lord Shallot was a troubled artist, who would often burn his paintings. It's said he accidently started the deadly blaze of 1898 by hurling an oversized water cooler into the fireplace."

There is also a portrait of Lady Mimsy in the dining room that was painted by Bernard on the very afternoon before they perished.

If a Sim speaks to Bernard's ghost, he can say: "My father pulled me aside on my wedding day and whispered that I was about to save our family from ruination. I vowed to myself that I would never become as pathetic a figure as he."[confirmation needed] 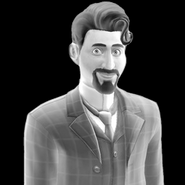 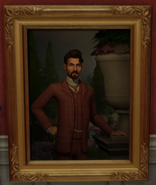 Item description of Bernard's portrait
Add an image to this gallery
Retrieved from "https://sims.fandom.com/wiki/Bernard?oldid=922736"
Community content is available under CC-BY-SA unless otherwise noted.