The Sims Wiki
Register
Don't have an account?
Sign In
Advertisement
in: Sims, Female Sims, Adults,
and 17 more
English

How Bella ended up in Strangetown without memories of her past life and how her appearance changed is one of the most well-known mysteries in The Sims series. Like other townies, she can be made playable by befriending and asking her to move in, or by marrying her.

Bella Goth is unique among the townies found in The Sims 2. She is the only townie in The Sims 2 with a preset biography. Unlike other townies and NPCs who are normally 29 days away from becoming an elder, Bella is 28 days away from aging up. Additionally, unlike other townies and NPCs, Bella has a default gender preference for males; most townies and NPCs do not have a gender preference at the start of the game. Bella's zodiac sign is not recognized when editing in SimPE. When viewed in SimPE, Bella is placed in the "Default" bin (a collection of deceased Sims and universal NPCs, such as the Grim Reaper), and not the "townie" bin. However, with SimPE, it is possible to move her there.

The two Bellas actually have different names in some languages. For example, in French, Bella is called Kathy Lalouche, while the Pleasantview Bella is called Sonia Gothik. In Thai, she's called "คิตตี้ คิวเรียส". Both of these translate to "Kitty Curious". In Simplified Chinese, she is called "贝拉 好奇", and it translates to "Bella Curious".

Bella was intended to be level 5 in an unknown career. With her pre-made skillset the only possible role this could be is an Executive in the business career, although she is slightly lacking in the required skill for that level. Since the career information is corrupted, she will be assigned a random career and matching skills during gameplay.

This Bella also has several oddities in her relationship data:

Some players decide to move her to Pleasantview and have Mortimer marry her. If the player gets Bella to move into a lot in Strangetown, they can move her house to the Lots and Houses bin. Next step is transferring her to Pleasantview by putting her house there. The player can make her get to know Mortimer by the use of cheats or have her move in to the Goth household, then start doing romantic interactions between the two. It's important to note though that Strangetown Bella will not be biologically related to Cassandra or Alexander if the player has her marry Mortimer. In addition, if Bella has not been played in a household prior to being added to the Goth household, she will be younger than Cassandra. However, moving Sims between neighborhoods by way of the Family bin or the Lots and Houses bin has been known to cause corruption in the game.

Warning
Moving Strangetown Bella to Pleasantview will cause corruption in both neighborhoods. 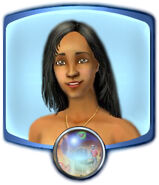