Not to be confused with Bella Goth (Strangetown).

Bella Goth (née Bachelor) is one of the pre-made Sims shipped with The Sims game, in which she lives with her husband, Mortimer Goth, and her daughter, Cassandra Goth. Between The Sims and The Sims 2, Bella and Mortimer had one more child, Alexander Goth. She also has an elder brother named Michael Bachelor. She is undoubtedly one of the most famous characters in The Sims series.

In The Sims 3, Bella is a child (7 days to teen) who lives with her mother, Jocasta Bachelor, father Simis Bachelor and older brother Michael Bachelor. Because she is still a child, she goes by her maiden name of Bachelor. She wears a red dress because this is her favorite color. Bella and Mortimer Goth are best friends (he is one day older than her). Her traits are Good, Brave and Lucky. She attends Elementary School and is a good student. She is also slightly gothic because her room and playroom are decorated with skulls, which may hint at why she married Mortimer, and also at her interest in the paranormal. She also has one point of the painting skill.

Life leading up to The Sims Bustin' Out

In The Sims Bustin' Out, Bella Goth lives with her husband Mortimer Goth in Goth Manor. Her daughter Cassandra Goth may or may not have been born yet. She has the same outfit as in The Sims. She works as a Horror Movie Extra in the Movie Star Career and likes to play the piano and read when she's not working. Her favorite interactions are telling stories and nagging about friends.

Life leading up to The Sims (console)

Bella Goth appears in The Sims (console) version with her husband Mortimer Goth and daughter Cassandra Goth living in 5 Sim Avenue. She still wears the same red dress and shoes, and has black hair. She shares a 90+ relationship with her husband and a 20+ relationship with her daughter. She likes to read, play chess, feed fish and mourn at the tombstones. Her brother Michael Bachelor is in the Family Bin as a playable character.

Life leading up to The Sims

Bella Goth, her husband, Mortimer Goth, and her daughter, Cassandra Goth, are first introduced in The Sims. She is an elegant, yet athletic, woman who seems to enjoy playing golf. Her activities when played will either be painting or playing the piano, which gives credibility to the theory that she may also be a very creative and talented person. She also has quite a high interest in the paranormal.

By the time the storyline has caught up to The Sims 2, Bella has had another child, Alexander Goth, and has disappeared via alien abduction. It is then revealed that Bella is Michael Bachelor's sister. She does exist in Pleasantview, but is hidden within the game code and can only be found using cheats or third-party programs. Bella's disappearance is a major component to the background story of Pleasantview and it's theorized that Maxis picked her for this major role because she is a mysterious, yet elegant, woman.

Her last known whereabouts are Don Lothario's deck and it is shown in the photo album and memory panel of Don that he had attempted to do some romantic interactions with Bella, which she didn't accept, before she mysteriously disappeared. Many of Mortimer's, Cassandra's, and Alexander's memories involve Bella, meaning that she hasn't been gone for too long. On the family tree panel, Bella's face is not gray, which indicates that the game does not consider her to be dead. Although her husband and her children have memories of her being abducted by aliens, the story does not explicitly state what happened to Bella.

Maxis created a likeness of Bella and used it as a townie in Strangetown. This version is a little different than the Pleasantview Bella, but is acknowledged by Maxis as the same Bella. The fact that the Bella in Strangetown has no memories of her loved ones or past life is simply blamed on alien experiments during her abduction. Strangetown Bella has a job as an executive in the business career, whereas the Pleasantview Bella, if brought back, has no career and no career memories.

It is rumored that Maxis originally created Bella, but she got deleted while creating the game. To cover up their mistake, they made up a story that explained her disappearance. Another odd detail is that, if Bella is brought back, Mortimer doesn't seem to like her very much, which leads some players to wonder if Mortimer played some role in her disappearance. Checking their character files shows that they have high relationship scores (85/95 each way), but also that the Crush and Love boxes are not checked for either of them. What, if anything, this says about their relationship is unclear, but it has led some players to speculate that it was, or had become, loveless.

Some players prefer to play the Bella Goth in Strangetown and consider her to be the real Bella because she has no connection to Pleasantview and is not tied with the Goth/Bachelor family tree, which lends credence to the theory that the alien experiments left her mind wiped. A further area worth looking into is when Alexander Goth goes off to University. If Mortimer is already deceased, the scene that the player sees before they enter the university features a regular Bella as Alexander's mother and she is sobbing about the loss of her son as he is grown up, but after that clip she still remains missing! Bella's hair didn't change much in The Sims and The Sims 2, but the dress she is wearing is no longer a dress, it is a 2 piece outfit which includes a skirt and a tube-top. In The Sims Bustin' Out, she is seen wearing a red leather corset gown. In The Sims 3, as a child, she wears two different outfits: a purple t-shirt with white arms and camouflage shorts, and a red dress similar to the one she wears in The Sims and The Sims 2.

A few people around the Internet have suggested many ways in order to get the Pleasantview Bella back. One way is to use the boolProp testingcheatsenabled and spawn the Tombstone of Life and Death to add Bella to the Goth family. Another is to use the inSimenator to summon Bella, improve her relationship to Mortimer, and set her as his spouse and resurrect her.

Bella Goth in Other Games

Her Bustin' Out biography states: Her name in Italian means "beautiful" and it fits her better than her red leather corset. Descended from a long line of occultists, mystics and decadents, she has thrown convention to the wind. Her disdain for the pedestrian and normal is only matched by her sense of ennui and isolation. She distracts herself from this world with a little organ practice and exotic gardenings of the lethal variety.

Bella Goth is perhaps one of the most well known Sims. She appeared in The Sims Bustin' Out along with her husband Mortimer, she was in the TV family in The Sims 2 for Gameboy Advance, she appeared in The Sims 2 for PSP, and she appeared in SimCity 4. According to her quotes in SimGolf (which she made an appearance as the download-able golfer, along with her family), she is very nice, an excellent neighbor, a little vain, compares bad things to Mortimer's foul moods and compares her family members to her shots (such as a Bella shot is too easy, a Mortimer shot is too difficult, and a Cassandra shot is impossible). She was also regularly featured on the cover for The Sims 1 and it's expansions.

There are many Easter eggs involving Bella Goth. Here is a list so far:

Bella Bachelor plays on the swing set with Mortimer Goth while her mother is waving at them.

Mortimer Goth and Bella Bachelor are fishing together.

Mortimer Goth plays with Bella Bachelor on the play set while Bella's mother argues with another lady. The lady seemingly looks like her deceased mother-in-law.

Bella Bachelor at the hospital in her red dress. She can be seen at the right side of the picture.

Bella in the Makin' Magic wallpaper.

The statue of Bella in Belladonna Cove. 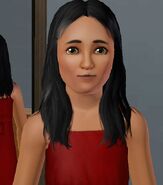 Bella Goth as a child.

A CD of Bella.

Bella on her bike. 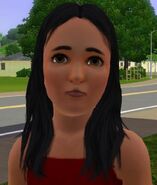 Mortimer and Bella Goth in The Sims Bustin'Out.

Bella going fishing on her bike.

Bella at the library
Add an image to this gallery

Retrieved from "https://sims.fandom.com/wiki/Bella_Goth?oldid=109522"
Community content is available under CC-BY-SA unless otherwise noted.