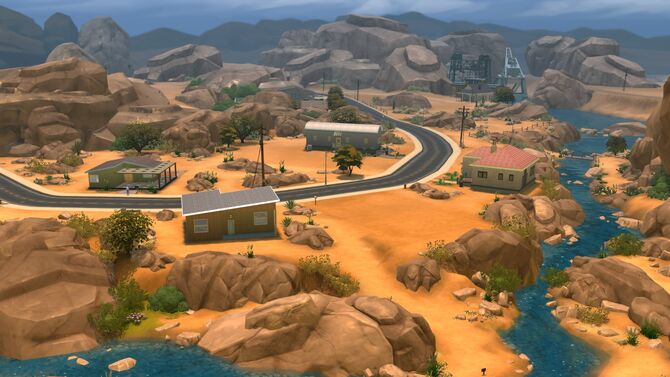 Bedrock Strait is a working-class neighborhood located in Oasis Springs, consisting of five medium-sized lots. New households to Oasis Springs usually settle here first because the properties are less expensive here compared to other neighborhoods. It also contains Johnny Zest's trailer and an empty lot, where the player can choose to build whatever they wish.

Sandtrap Flat is an uninhabited lot in Bedrock Strait. It has one floor and contains 3 separate rooms: a bedroom with double bed, a bathroom and a joint kitchen and living area. It also has a reasonably large yard area at the back.

Nookstone is an uninhabited lot in Bedrock Strait. The house is largely open plan with the bathroom being the only room separate from the others. In addition to the bathroom it contains a basically furnished kitchen and dining area, living area and bedroom. It has very little outdoor space.

Pebble Burrow is the only empty in lot in Bedrock Strait. It is the perfect place for your sim to build a starter home. Behind it is a creek with a fishing spot.

Slipshod Mesquite is a residential lot in Bedrock Strait which is home to Johnny Zest. The house contains a living area, kitchen, bathroom and bedroom. The lot also has a very large outdoor space. It is the most expensive house in the neighborhood.

Agave Abode is an uninhabited lot in Bedrock Strait. It contains two bedrooms (one single and one double), a bathroom, a kitchen and a living/dining area. It has almost no garden space.

Bedrock Strait contains very few amenities. There are four fishing spots and a very sparse community garden area consisting of three planters, a grill, a well for finding frogs, and two picnic tables. If Seasons is installed, a food stall will appear as well.

Bedrock Strait as seen in the old map view.

View from high above.

Barry the Brontosaurus in the background of Bedrock Strait near non-accessible buildings
Nederlands Русский
Community content is available under CC-BY-SA unless otherwise noted.
Advertisement