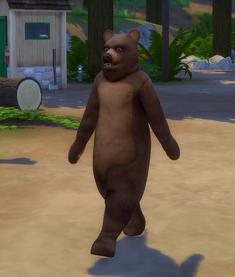 A Sim dressed as a bear in Granite Falls.

A bear is a type of costume that Sims can wear in The Sims 4: Outdoor Retreat, The Sims 4: City Living and The Sims 4: Parenthood. Bears also appear as NPCs in Outdoor Retreat, usually met in the area surrounding the campground in Granite Falls. They are randomly generated townies dressed in the bear costume and walk around the camping area, usually trying to talk to other Sims.

When Sims are near another Sim wearing the bear suit, they will become tense and gain the options to "Rant about Obnoxious Bear" and "Gossip about Bear" with other Sims. Sims in a bear suit have ability to roar at another Sim, which will make them tense as well. However, this mean interaction is only available to Sims with the bear suits from Outdoor Retreat and City living, so Sims wearing the Parenthood bear suits cannot roar at others. When Sims are near familiar bear suit wearers, such as other household members, they will not become tense unlike with the NPCs, if they do not roar. The interaction to complain about bears also only becomes available if the household member roars and gossiping about a bear never appears with household members wearing the suit, and only when NPCs bears are around.

In Parenthood, the fruit themed bear suits are available to both kids and adults, though the special interactions and moodlets do not appear on both life stages. Children will sometimes gain the "I'm a Bear!" childhood phase, which make the child autonomously change their clothing into a fruit bear costume. They will also get a sad moodlet if not wearing the outfit and parents of the said child can wear the outfit with them.

A bear roaring at a Sim.

The recolors of the Outdoor Retreat bear suit.

The recolors of the City Living bear suit.

The recolors of the Parenthood bear suit, both child and adult.
Add an image to this gallery
Retrieved from "https://sims.fandom.com/wiki/Bear?oldid=904088"
Community content is available under CC-BY-SA unless otherwise noted.