The Beaker family is a pre-made family that first appeared in Strangetown from The Sims 2 and returned in the downloadable neighborhood of Aurora Skies from The Sims 3 Store and Oasis Landing from The Sims 3: Into the Future.

The family from The Sims 2 consists of Loki Beaker, Circe Beaker, and their test guinea pig, Nervous Subject. They live in a large mansion on a hill, complete with a cell-like room in the basement for Nervous, and several suspicious-looking machines, which are mostly career and aspiration rewards. Their address is 1 Tesla Court, located near the alien crash site. The Beakers have a longstanding rivalry with the Curious family, probably stemming from the fact that Vidcund Curious was Circe's first flame. On Loki's side of the family, he and his sister are possibly of Norse or Swedish descent, judging from the last name of their maternal grandparents, Halfdanarson. Circe may be of Greek descent on her father's side of the family.

In The Sims 3, the family returns in the downloadable neighborhood of Aurora Skies. Bjorn, Gundrun, Loki and Erin are present.

The family also returned in Oasis Landing. Loki's genetically engineered children, Atom and Ceres, were transported into the future though a scientific experiment.

Beaker: a glass object used for measuring and holding fluids in a laboratory setting. 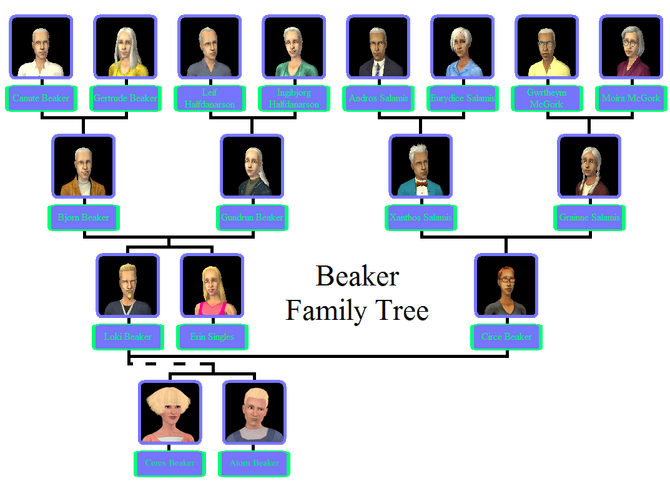 Retrieved from "https://sims.fandom.com/wiki/Beaker_family?oldid=656706"
Community content is available under CC-BY-SA unless otherwise noted.