The Sims Wiki
Register
Don't have an account?
Sign In
Advertisement
in: Premade families, Families with 3 generations, Families from The Sims 2 (base game),
and 14 more
English

The Beaker family is a pre-made family that first appeared in Strangetown from The Sims 2 and returned in the downloadable neighborhood of Aurora Skies from The Sims 3 Store and Oasis Landing from The Sims 3: Into the Future.

The family from The Sims 2 consists of Loki Beaker, Circe Beaker, and their test guinea pig, Nervous Subject. They reside in a large mansion on a hill, complete with a cell-like room in the basement for Nervous, and several suspicious-looking machines, which are mostly career and aspiration rewards. Their address is 1 Tesla Court, located near the alien crash site. The Beakers have a longstanding rivalry with the Curious family, probably stemming from the fact that Vidcund Curious was Circe's first flame. On Loki's side of the family, he and his sister are possibly of Scandinavian descent, judging from the last name of their maternal grandparents, Halfdanarson, and first names of all their relatives. Circe may be of Greek descent on her father's side of the family.

Upon loading the lot for the first time, the game will direct the player to get Circe to work in a good mood in order to receive her desired promotion, at which she will most likely always succeed.

"Circe wants a big promotion! Get her to work in a good mood, and maybe her efforts will pay off!"

In earlier development stages of the game, the Beaker family was seemingly meant to introduce the player to the Big Boss Scenario, according to an early string found in the game files, before it ultimately got scrapped entirely.

In The Sims 3, the family returns in the downloadable neighborhood of Aurora Skies. Bjorn, Gundrun, Loki and Erin are present. According to their bio, their family is implied to live for "friendly science in a friendly society", strongly contrasting the ethically questionable experiments Loki and his wife Circe conduct on Nervous Subject in The Sims 2.

The family also returned in Oasis Landing. Loki's genetically engineered children, Atom and Ceres, were transported into the future through a scientific experiment.

An official Maxis recreation of The Sims 2 Beaker family was uploaded to the The Sims 4 Gallery on March 19, 2019, marking the 19 year anniversary of The Sims. In addition to Loki, Circe, and Nervous, the household also features young Atom and Ceres as Loki's children. 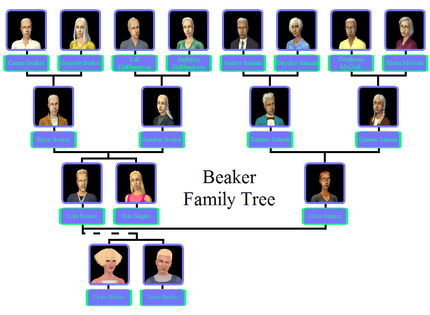 Beta screenshot of the family. Circe's face looks rougher than in the final game.

Beta screenshot of the family. Loki's face looks chubbier than in the final game.