The Sims Wiki
Register
Don't have an account?
Sign In
Advertisement
in: Types of lots, Lots, Community lots,
and 4 more
English

In The Sims: Vacation, one of the three distinct areas of Vacation Island is a beach area, which has three lots, a hotel, a campground and a community lot. Sims will normally wear swimsuits in this area, though they cannot go into the sea. However, on some lots, the sea can be seen and the ocean waves are often heard when playing, mostly in the early morning, evening and early night. In early hours of the morning and on some afternoons, seagulls can also be heard squawking.

Proper beach lots were introduced in The Sims 2: Bon Voyage, and must be placed adjacent to a body of water. Premade beaches can be found on Twikkii Island, but players can also create their own beaches in any neighborhood. Many premade neighborhoods do not provide room for creating beach lots, however. An easy default location that allows the player to build a beach lot is Bluewater Village.

To create a beach, open the Lots and Houses bin from the neighborhood screen. Click on the Specialty Lots button next, and options to create special lots such as dormitories[University], hotels[Bon Voyage], apartments[Apartment Life], etc. Click on the Create Beach option in the left-hand area, next to the thumbnails of special lots.

Beach lots function the same as regular lots, but the side facing the lot will contain a segment of ocean that Sims can swim in. Swimming in the ocean will provide a vacation memento, even if the beach lot is not located in a vacation neighborhood. Sims can build sandcastles, comb for seashells, watch the waves, and sunbathe on the actual beach along the shoreline. Toddlers can also eat sand.

If Seasons is installed, the ground will not get completely covered in snow during Winter. Snow will still fall, but very rarely and only lightly.

Attracts
Sims with the Athletic and Loves the Outdoors traits.

Deters
Sims with the Hates the Outdoors trait.

Skill encouragement
Sims with the athletic skill are encouraged to visit and build the skill.

Although Sims can visit beaches in The Sims 3, they cannot swim (returned in The Sims 3 Seasons and Patch 42), comb for seashells, build sandcastles, or watch the waves. They can only sunbathe on the loungers, play chess, fish, cook and eat food, or make some drinks at a bar. Players can use a beach as party venue. Since beaches can be large and have plenty of refreshments and activities, that is a good choice.

Beach lots attract Sims in a similar way to pool lots. Beaches often feature grills and deck chairs. Sims can also go jogging around the beach at the morning. Sims may bring their toddlers here. If Pets is installed, pets from other households do not visit beach lots.

In The Sims 3: Island Paradise, beaches are expanded. NPC Sims will now swim in the ocean autonomously and Sims can now sunbathe on beach towels and play in the sand. It is also where the Lifeguard profession takes place.

Areas with no beaches[]

There are no beaches in Riverview, though the river and fish hatchery makes up for it. There are no lots assigned as beaches in the World Adventures destinations of Al Simhara, Champs Les Sims, and Shang Simla.

Hidden Springs from The Sims 3 Store has no beaches. It has a lot similar to a beach, but it is assigned as a fishing spot. 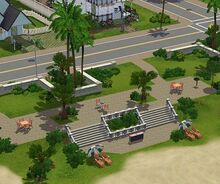 Old Pier Beach is the only default beach lot in Sunset Valley, although there are two small parks that look like beaches.

River Junction Beach Park is the only default beach lot in Twinbrook. It features a gazebo and few outdoor objects. 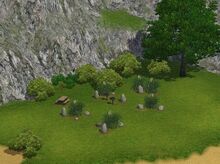 Founder's Beach is a small beach lot in Barnacle Bay. It features two grills and a picnic table. 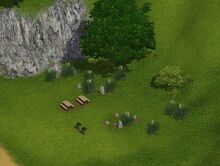 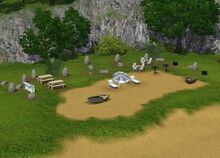 Smuggler's Cove is the only default beach lot in Bridgeport. It features broken boats, as well as bars, grills and picnic tables. This beach looks by far the most polluted beach, as Bridgeport is an industrial area.

Adventure Landing is the only default beach lot in Appaloosa Plains. It resembles a pier, featuring a single grill and three picnic tables.

Oasis Shoreline is the only beach from Lunar Lakes. It has lounge chairs, picnic tables, and a grill. 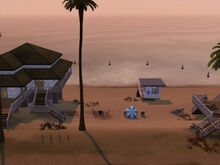 Delmar Beach is the only default beach lot in Starlight Shores. It features a whole building, with a second bathroom building for recreation. It also includes the tall new palm trees that come with the game, as well as some umbrellas and picnic baskets.

Lakeside Retreat is the only beach from Lucky Palms. It has lounge chairs, and a bathroom area.

Hot Sands Beach is a beach from Sunlit Tides, a world from The Sims 3 Store. This beach is inside the lagoon, as opposed to Captain Jack's Beach which is outside of the lagoon in the ocean. There are a few chairs and a barbecue pit.

Captain Jack's Beach is a beach from Sunlit Tides, a world from The Sims 3 Store. Unlike Hot Sands Beach, this beach is on the exterior land strip opposite of the lagoon. In simple terms, it connects with the ocean and not the lagoon. This beach is larger than Hot Sands, featuring more chairs, umbrellas, and even a pier.

La Shove Beach is the only beach that comes with Supernatural. The sand looks to what appears to be just rocks instead of sand, and a very gloomy beach in general. It fits the setting of Moonlight Falls very well.

Sunbather's Retreat is one of the two beaches that comes with Monte Vista.

Venice Beach is one of the two beaches that comes with Monte Vista.

Basalt Beach is one of the five beaches that comes with Aurora Skies.

Bonfire Beach is one of the five beaches that comes with Aurora Skies.

Coastal Cove Beach is one of the five beaches that comes with Aurora Skies.

Fjara Beach is one of the five beaches that comes with Aurora Skies.

Serenity Sands Beach is one of the five beaches that comes with Aurora Skies.

Llama Beach is the only beach from Sims University. It has picnic tables, lounge chairs, and grills.

Cladach Beach is one of the three beaches that comes with Dragon Valley. It has two grills, picnic tables, and lounge chairs.

Mol Beach is one of the three beaches that comes with Dragon Valley. Unlike other beaches in Dragon Valley, this beach has a bathroom area.

Tràigh Mhòr Beach is one of the three beaches that comes with Dragon Valley.

Bella Vista Beach is one of the three beaches that comes with Isla Paradiso. The beach features two lifeguard chairs and a barbecue pit with picnic tables.

Sparkling Sands Beach is one of the three beaches that comes with Isla Paradiso. The beach has a very close proximity to Sparkling Sands resort and comes with a lifeguard chair and a fire pit although there are no bathrooms on the lot.

Crystal Waters Beach is one of the three beaches that comes with Isla Paradiso. The beach itself is rather minimal in general compared to the other two beaches, although it does feature a bathroom.

Somber Beach is one of the two beaches that comes with Midnight Hollow. It has four picnic tables, two grills, and a fire pit.

Bizarre Beach is one of the two beaches that comes with Midnight Hollow. It has four picnic tables, three grills, and a fire pit.

Unlike other beaches, beaches from Oasis Landing are not surrounded by or located adjacent to the ocean. These are called dried up beach. Sims mostly use this place for sunbathing.[TS3:S] It can be filled with water using the Edit Town mode, however it is very small and the spacing for filling the water is narrow.

The Derelict Beach is a default dried up beach lot in Oasis Landing. It has a chess set, a divided bathroom, one small grill, a fire pit, a guitar, and a bar area.

Oceanfront Beach is one of the two beaches from Roaring Heights.

Ridgeview Beach is one of the two beaches from Roaring Heights.

In The Sims 4: Island Living, beaches function similarly to parks, except Sims will also autonomously partake in beach activities such as sunbathing, building sand sculptures, swimming, snorkeling, scuba diving and boating. The requirements for beach lots are one public bathroom, one lounge chair, one water vehicle and one float lounger, all of which are optional. If The Sims 4: My Wedding Stories is also installed, lots in Tartosa can be designated as beaches.

Beaches have lifeguards on duty during the day, which is when this venue type has the most visitors. At nighttime, beaches are much less busy. Mermaids are drawn to beaches, but they will hide their tails until Sims in the player's household discover them.

Sulani has seven beachfront lots that can be built on, though only two are assigned as beaches by default.

Ohan'ali Beach is in the Ohan'ali Town neighborhood. It's intended to be the more general-purpose beach in Sulani. It includes a community canoe dock, swings, a chess table, beach towels, a barbecue, a picnic table, cheap lounge chairs, float loungers and a public bathroom.

Sand Simoleon Beach is in the Lani St. Taz neighborhood. It's intended to be the more upscale beach in Sulani, with more expensive furniture and decor. It includes a gazebo built out over the water, lounge chairs, a bonfire and a barbecue area.

Sand Simoleon Beach has one lot trait, Oceanic Paradise, which cannot be removed.