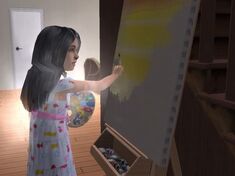 A Sim painting in the zone

"Be in the Zone" is an autonomous interaction gained when a Sim reaches the final level of any hobby. Being "in the zone" causes the Sim to glow with a white light whenever performing an action pertaining to the hobby they have reached the maximum level in. However, it appears that Sims cannot be "in the zone" while in areas where enthusiasm cannot be built.

Effects of being in the zoneEdit

Retrieved from "https://sims.fandom.com/wiki/Be_in_the_Zone?oldid=830092"
Community content is available under CC-BY-SA unless otherwise noted.