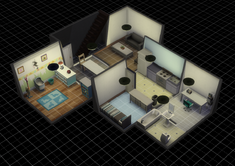 A basement in The Sims 4

Basements in The Sims 2 and The Sims 3 can be created using foundations by placing an area of foundation that is hollow in the center, then lowering the terrain inside the hollowed-out foundation so that the area in the basement is the equal height of a typical floor. This makes the basement a fully usable space accessible by Sims, so long as the Sims have a means to reach the basement.

Patch 6 for The Sims 3 and patch 15 for The Sims 4 introduced the Basement Tool into build mode, allowing the construction of basements on buildings without foundations. The tool was previously used to construct the tombs included in The Sims 3: World Adventures. Basements created using this tool are considered an additional story level under the ground, and when viewed the surrounding area is black, rather than showing the terrain. The basement stairs cannot connect directly to a foundation in The Sims 3, but they can in The Sims 4. Basements in The Sims 3 and The Sims 4 can be as deep as four stories.

To build a basement in The Sims 4, either the basement tool or custom basement tool can be used to draw rooms, similarly to how above-ground rooms are created. However, if the player would like to build a basement a wall at a time, they will have to change the focus of the floor to an underground floor, which requires that there be at least one wall on the floor above (though it can be deleted after being placed). No pre-zoning of the basement is required in The Sims 4.

If a basement is built under a raised foundation using the basement tool or custom basement tool, it will cause surrounding terrain to "jump up" to the top of its walls, as the basement is slightly raised out of the ground. To avoid this, players should instead build basements while focused on an underground floor (using the wall tool or the room tool), so that the foundation will not influence its height.

A house with a basement in The Sims 2.

Basement of Tri Fruhm Sorority in Sims University in The Sims 3.

Basement of Urele Oresha Cham Fraternity in Sims University in The Sims 3.

Basement of Straud Mansion in The Sims 4: Vampires.

A raised basement distorting the terrain in The Sims 4.