The Sims Wiki
Register
Don't have an account?
Sign In
Advertisement
in: Types of lots, World Adventures, Community lots,
and 6 more
English

For the similar community lot in The Sims and The Sims 2, see Hotel.

Base camps are a variety of lot and a lot assignment that were introduced in The Sims 3: World Adventures and The Sims 3: Into the Future.

These lots act as a home for Sims on adventures or visiting the future. There is one base camp in every destination from World Adventures, and each one holds a noticeboard that generates new adventures. The noticeboard also acts a mailbox where sims can submit gems and other items for processing. Explorer NPCs also stay with you at the base camps. Creators using Create a World can set lots to base camp but the lot type serves little purpose in home worlds.

Into the Future's base camp does not include a noticeboard. Instead, Sims take future opportunities from Emit Relevart, the time traveler. 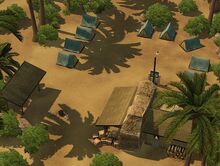 Al Simhara Base Camp in The Sims 3: World Adventures.

Al Simhara Base Camp is the name of the base camp in Al Simhara. It is a sparse camp with plenty of cheap tents as accommodation. It is minimalist in the extreme. It backs onto a small tomb.

Champs Les Sims Base Camp in The Sims 3: World Adventures.

The Champs Les Sims Base Camp is a large French-style building resembling a hotel. There are lots of beds, a Chess Table, and a full kitchen. It is probably the most luxurious of the three base camps. 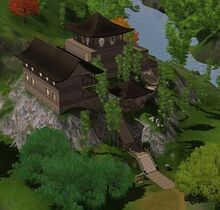 Shang Simla Base Camp in The Sims 3: World Adventures.

The base camp in Shang Simla has several floors, it is elevated into the hillside. There are bookshelves where Sims can read rare books without purchasing them. It has an excellent view of the Dragon Cave, and is located near the river.

The Sims 3: Into the Future camps[]

Community Living Center in The Sims 3: Into the Future.

The Community Living Center is the default base camp for Oasis Landing, also has four floors. It includes many furniture for Sims especially the time portal that is on the fourth floor. It has an excellent view of the city hall and also one of the largest buildings.