Barbecue grills are an outdoor cooking appliance found on community lots, where they are a standard way for Sims to feed themselves. They can also be bought for residential use.

Using a barbecue grill costs §20, and always produces a plate of burgers. Using it on a residential lot is generally like preparing a group meal, except that the grill is a greater fire hazard. It's recommended that Sims have four or five Cooking points before using it.

Using a barbecue grill on a community lot is a bit different. The plate of burgers will be ignored by all Sims except for a) any members of the grilling Sim's family who are on the lot, or b) the grilling Sim's date (if any). Even they will ignore it after taking one serving, even if they're still hungry and there are still burgers on the plate. Even the Sim who grilled the plate of burgers will ignore it after taking one serving. Controllable Sims can be directed to take another burger from the plate, but will not do this autonomously. Also, townies and/or neighborhood Sims may grill autonomously, which can get costly because the controllable Sim(s) will be charged, unless the player is using a default replacement grill that has been fixed to prevent this. The player can direct controllable Sims to eat from these plates, so this can be used as an opportunity for socializing and relationship-building.

For a list of barbecues in The Sims, see Barbecue/The Sims.

Depending on Cooking skill, a Sim may use a barbecue grill to prepare hot dogs, hamburgers, or grilled ribs. (Hot dogs and ribs can only be prepared on a grill.) If Seasons is installed, fish can be grilled, if it's available. Sims cannot grill on residential lots unless a refrigerator is present. Barbecue grills can be safely used indoors on community lots, but are a fire hazard if used indoors on residential lots. Sims can burn food when using a barbecue grill.

In The Sims 2, barbecue grills have become a standard way for Sims to feed themselves on community lots, where they seem to have replaced the carts, kiosks, and stands which were commonplace on community lots in The Sims. There is no charge for grilling on community lots, and non-selectable Sims will not grill autonomously unless a refrigerator is present. Selectable Sims might grill autonomously if they are hungry enough, but usually will not. When a Sim grills, they will serve the food they cook, and other Sims on the lot will come to eat it. The "Serve" action can be interrupted by the player, and it may be necessary to do this to make sure that the Sim grilling the food gets to eat some of it. If the "Serve" action is interrupted, other Sims on the lot may still take food from the serving platter.

When Sims are finished using a grill, they may leave the lid open, and there is no option to tell a Sim to close it. There is a mod at MTS that adds this functionality.

For a list of barbecues in The Sims 2, see Barbecue/The Sims 2. 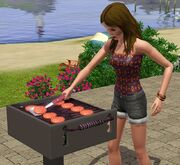 Barbecues are relatively similar in The Sims 3, as they depend on the cooking skill to make Hot Dogs, Hamburgers, Cheesesteak, Tri-Tip Steak, and Grilled Salmon. Many grills are placed on community lots, and any Sim may cook on them when they are hungry. Barbecues raise the cooking skill when Sims use them.

For a list of barbecues in The Sims 3, see Barbecue/The Sims 3.

For a list of barbecues in The Sims 4, see Barbecue/The Sims 4.

Retrieved from "https://sims.fandom.com/wiki/Barbecue?oldid=851762"
Community content is available under CC-BY-SA unless otherwise noted.