The Bailey-Moon family is a pre-made family residing in Del Sol Valley, the world introduced in The Sims 4: Get Famous. It consists of Octavia Moon, her husband Thorne Bailey and their son Orange Bailey-Moon. They live in the Bailey-Moon Manor lot and start off with 50,000 Simoleons.

Thorne and Octavia are celebrities in music making, with Octavia being the lyrical genius of all the greatest hits Thorne is known for. However, according to the family biography, Thorne has recently had a mishap on social media, making his public image and reputation much worse. His followers have also started to realize that Octavia is the real talent. The famous couple also has a son, Orange, who is described to be a little bit naïve due to his lifestyle of wanting-for-nothing.

Bailey: Derived from the Middle English word "baili", meaning "bailiff".
Moon: Originally given to people from the town of Moyon in Normandy.
Thorne: Derived from the surname Thorn, originally given to people who lived near thorn bushes.
Octavia: Feminine form of the Ancient Roman name Octavius, meaning "eighth".
Orange: Can refer to the color orange or the fruit of the same name. 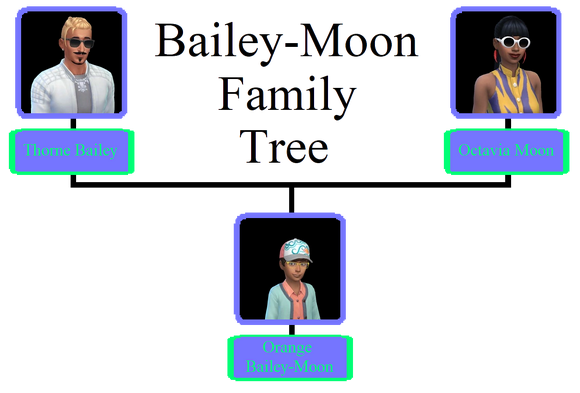 Retrieved from "https://sims.fandom.com/wiki/Bailey-Moon_family?oldid=940727"
Community content is available under CC-BY-SA unless otherwise noted.