In The Sims 3 the prequel to The Sims, Jocasta Bachelor and Simis Bachelor are adults, living with their daughter, Bella Bachelor, who is a child, and their son, Michael Bachelor, who's a teenager. The Bachelor family is portrayed as being a picturesque, tight-knit family. It is clear that the family is close, as all of the members of the family are friends with one another. According to the bio, Simis Bachelor is the head of the household who imposes strict rules for everyone to abide by. Jocasta, meanwhile, is mainly a housewife and stay-at-home mom (even though she has a part-time job, at the book store) to Michael and Bella, the "well-behaved" kids in the neighborhood.

Simis appears to have Hispanic and/or Italian ancestry while Jocasta is suggested to be of Greek descent, whereas Mortimer's family has an English/German background. They may also have Romani heritage as hinted by their swarthy features and Bella's bio in The Sims Bustin' Out, as well as her connotation to the supernatural. 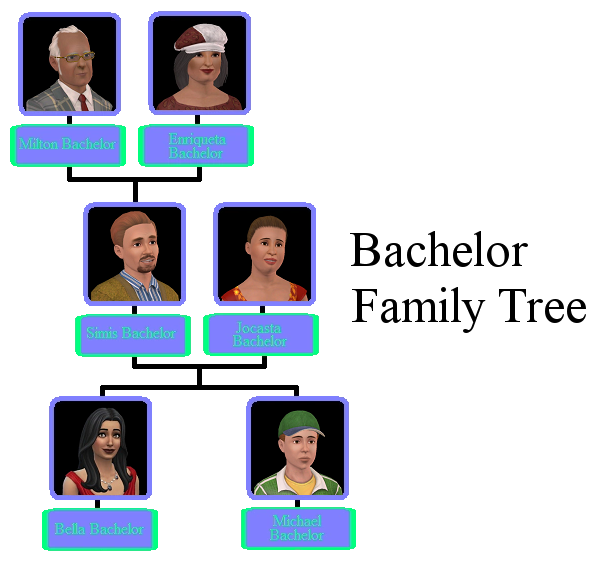 Jocasta and Simis having some alone time.
Add an image to this gallery

The third floor
Add an image to this gallery
Retrieved from "https://sims.fandom.com/wiki/Bachelor_family?oldid=825617"
Community content is available under CC-BY-SA unless otherwise noted.