Ava Cadavra is an Urb from The Urbz: Sims in the City, who works as a cashier. She also moved to Strangetown during the events of The Sims 2 for Game Boy Advance and for Nintendo DS.

The Urbz: Sims in the City (handheld)[edit | edit source]

Ava's sprite character made her first appearance in the handheld version of The Urbz: Sims in the City, where she serves as a cashier in Phoebe Twiddle's shop. However, unlike her appearance in The Sims 2, she has short purple hair and is wearing a white tank top instead of a black coat. She cannot be interacted with at that time.

Years later, Ava has moved into Strangetown, in search of "history." She demands to stay in the Penthouse and is the second antagonist in the game.

She tells the player to build a cave in the hotel, which she uses to worship the Prime Heifer. She also asks for a mystic cowbell and a tube of "rotting eggplant" lipstick (which can be found on a cow and in the store, respectively). She tries to bring the Prime Heifer into the physical world, but, after listening to Horus Menhoset IX, the player destroys the statue, which causes Ava to furiously leave the hotel and set the Penthouse on fire.

After completing her section of the game, she may stay in the hotel as a guest. When checked in, she promises not to cause any more trouble.

The episode, "The New Cola," starts off with her and Dusty Hogg arguing about ladybugs. She really enjoys them, whereas Dusty does not. She plays a slightly bigger role in "Triassic Trouble," as she bid on a dinosaur skull. The player must get it back for her, and in order to do that, must give her an item with equal gothic appeal. The item is an Egyptian funeral urn and can be found by going to the Ziggurat.

According to her bio, she used to be a drummer for a band called The Germinators. 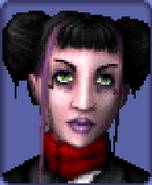 Ava Cadavra checking into the player's hotel
Add an image to this gallery
Retrieved from "https://sims.fandom.com/wiki/Ava_Cadavra?oldid=942147"
Community content is available under CC-BY-SA unless otherwise noted.