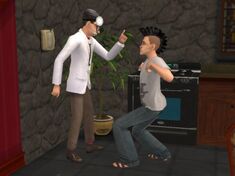 Aspiration is the personality attribute that determines a Sim's wants and fears.

With the cheat, boolprop testingcheatsenabled true players can find another aspiration, Power. It was apparently an abandoned though, because it has no icon and its wants and fears are similar to the Popularity and Fortune aspiration wants and fears. The "Power" aspiration usually involves making friends and gaining promotions. However, this aspiration is not possible to get in any other way, and as such, is defunct. (Furthermore, the aspiration bar cannot be accessed without a reset process). There was also going to be a Craft Aspiration, but it was removed early on and cannot be accessed. Now it is only referred to as unused in the game files, although Creativity is an aspiration in The Sims 2 for console and The Sims 2 Pets for console.

There are three possible aspirations in The Sims 2 on Game Boy Advance. Five points are awarded for each (up to the 5th) conversation of the same type as the Sim's aspiration in each episode.

Retrieved from "https://sims.fandom.com/wiki/Aspiration_(The_Sims_2)?oldid=375997"
Community content is available under CC-BY-SA unless otherwise noted.