Ashley Sinclair (née Pollard) is a pre-made playable adult Sim who resides in Four Corners, one of the neighborhoods shipped with The Sims Life Stories. She is a co-worker of Dylan who attends Mickey and Agora's wedding. Ashley also gives a gift to Riley after her wedding. She is the wife of Waring Sinclair, who fears Ashley cheating on him, which she does in the story with Dylan, since she ends up dating him.

When Ashley meets Riley during the story, she claims to work at the bank with Dylan; however, when she becomes playable she is actually revealed to work in the Culinary career. Her claim to work with Dylan may be an attempt to cover for their affair, or this may simply be because there is no career in the game equivalent to working in a bank.

Ashley is playable at the end of Riley's story. When the family is first played, she is 26 days from being an elder. Even though Ashley has reached level 6 of the Culinary career, she doesn't have the corresponding career reward available for her to purchase. 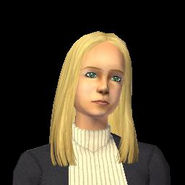 Ashley's head-shot in the Free Play version of the neighborhood.
Add an image to this gallery
Retrieved from "https://sims.fandom.com/wiki/Ashley_Sinclair?oldid=902842"
Community content is available under CC-BY-SA unless otherwise noted.