Armand DiAggro is a Sim who appears in various promotional materials for The Sims 4. He can be downloaded from SimGuruZephyr's and Maxis's Gallery profiles. He seems to have good and expensive taste and appears to be well-off.

In the "It's Amber" trailer, he is shown to be Amber Stein's best friend and roommate, it's later revealed that the marries Amber in "The Sims 4 City Living: Official Festivals Trailer". On a promotional render Armand is shown to be in a relationship with Bjorn Tu'Rock, implying he is bisexual. Since the promotional render with Armand and Bjorn came in 2014, and the trailer where Armand is seen marrying Amber came in 2016, it's implied that Armand and Bjorn aren't in a romantical relationship anymore. 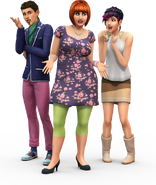 Armand seen together with Bjorn Tu'Rock. Render from 2014.

Amber Stein and Armand DiAggro marries at the Romance Festival. Screenshot from the "The Sims 4 City Living: Official Festivals Trailer" from 2016.

armand diaggro render
Add an image to this gallery

Retrieved from "https://sims.fandom.com/wiki/Armand_DiAggro?oldid=944865"
Community content is available under CC-BY-SA unless otherwise noted.