The Sims Wiki
Register
Don't have an account?
Sign In
Advertisement
in: Sims, Female Sims, Young adults,
and 9 more

Ara Fusilli is the smart, sassy, and terminally bored daughter of Frankie Fusilli, featured in The Sims 2 for Nintendo DS and The Sims 2 for Game Boy Advance.

Ara Fusilli is a character in The Sims 2 for Game Boy Advance who play a roles in a handful of episodes. She appears on in the episode introduction cut scene that starts at the beginning of every episode. She can usually be found in front of the casino or somewhere around her house. Frankie Fusilli is very protective of her and doesn't let her do all too much.

The player first meets her into the tutorial episode, barging in on the welcoming party to call it "boring" and say hello. If you talk to her before the party, she will accuse the player of being hired by her father to follow her around.

During the mission "Buried By the Mob," Frankie Fusilli instructs the player to cheer her up in order to get his respect. The player will then find her in front of the casino, where she will say that she wants to go into it but Giuseppi Mezzoalto is watching her. The player must distract him by giving him a paddle ball bought at the store. Ara Fusilli will then go into the casino, and after doing a bit of gambling, she will put in a good word with her father. The player and her will travel to the Fusilli's house where they will talk to Frankie and come up with a story for what happened.

She is part of the hidden want in "A Brand New Scent." After talking to Misty Waters about selling Kayliegh Wintercrest's perfume to the other ladies of Strangetown, she is one of the people that the player must talk to. She will refuse the offer.

In the episode "The Doomed Earth," the player will be assigned to borrow a telescope from Tank Grunt, which he uses to spy on her upon her father's hiring. To get it the player must convince either Tristan Legend or Luthor L. Bigbucks to flirt with her, for which her father will ground her. Tank will storm out of his house and will confront Ara, giving the player time to enter his house and take the telescope to Penelope Redd.

During "It All Came to an End," Ara and Dusty Hogg will run up at the player the moment that Optimum Alfred blows up, talking about how it was Tristan Legend who made him. Also, if the player decided to ally with Daddy Bigbucks, she will be one of the sims that the player has to convince that they aren't in a television show.

As revealed in "A Very Special Reunion," Ara Fusilli left Strangetown to become an actress. The player has to pay Frankie 2000 simoleons in order to get transportation for her to attend the reunion.

Ara appears in The Sims 2 for Nintendo DS as one of the possible guests in the hotel. Although she does not have a direct role in the story, she is one of the Sims who are put into a trance by Ava Cadavra at the Prime Heifer's shrine.

Ara Fusilli's secret from The Sims 2 (Nintendo DS) is that she touched an electric fence when she was a kid, and now always knows which way is north. 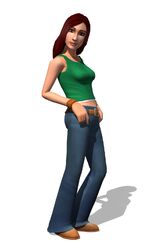 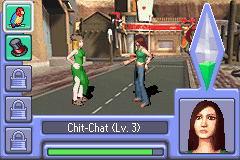