Apothecary Todd is one of the three Magic Town vendors. He and his Wagon O' Wares appear in Clowntastic Land, Forest Edge Camp, Vernon's Vault, and Serra Glen, making him the most common vendor seen by default.

In a toadstool race, Apothecary Todd will run between the toadstools, making him tricky to beat without the teleport ability or family members to help the player out. However, he is easier than Mara. In a similar manner he is in between the other two vendors in terms of how well he can duel. He is most likely to give Clown Confetti as a quest reward. 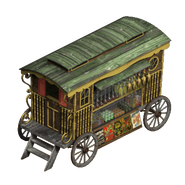 Todd by his wagon. 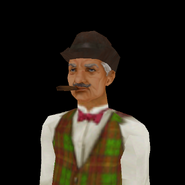 Retrieved from "https://sims.fandom.com/wiki/Apothecary_Todd?oldid=876976"
Community content is available under CC-BY-SA unless otherwise noted.