Anne T. Septik is one of the pre-made maids featured in Twinbrook from The Sims 3: Ambitions. Like all premade NPCs, she has no known relatives, and she is single. She also has no relationships with the neighbors, since she has not been hired by anyone. Anne is very different from other maids in Riverview and Sunset Valley, having five traits, which are Great Kisser, Flirty, Artistic, Eco-Friendly and Neat, while most of the maids in the game have four traits which are the Charismatic, Kleptomaniac, Neat and Brave traits. 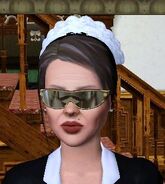 Anne in-game
Add an image to this gallery
Retrieved from "https://sims.fandom.com/wiki/Anne_T._Septik?oldid=821804"
Community content is available under CC-BY-SA unless otherwise noted.