Anna-Liza Riddle is a pre-made Sim who was introduced in The Sims 3 Ambitions. She is an elderly woman living alone in Twinbrook, at 338 Rue de Sterling. She is a retired Professional Blogger. She may be a parody of Agatha Christie, as both love to write about mysteries and crimes.

She is an accomplished writer, especially when it comes to mysteries, having level 5 Writing, level 2 Logic, and both Perceptive and Bookworm traits. At the beginning of the game she will usually get wishes to go back to work, which will help her complete her lifetime wish.

Anna-Liza's house is much larger and contains much more furniture than she needs, having three expensive computers (including Anna-Liza's laptop), two dining tables, and, most strange of all, a second bedroom, which seems to be decorated for a little girl. To some players, this bedroom implies that Anna-Liza wants to adopt a girl. Mysteriously, in CAS Anna-Liza is wearing a ring usually used as an engagement ring.

It is implied that Anna-Liza is a very nosy person; she has a telescope in her attic that's pointed out a large window, allowing a good view of the entire neighborhood, and she starts the game as enemies of her next door neighbors, the Sargeant family and Wei Keane of the Hi Tech Friends household, but she is best friends with Justin Kayes.

In Anna-Liza's attic, there is an urn for a Di. L. Emma Riddle, who apparently died of old age. Whether she is an ancestor of Anna-Liza is a matter of speculation, but there are some similarities between the two, such as the Perceptive and Bookworm traits and their facial structure.

Anna-Liza's name in Spanish and Portuguese (Analisa, imperative form) means "Analyze". Her name is a pun on "Analyze a riddle".

If aging is on, she will most likely be the first person in Twinbrook to die from old age. 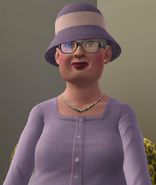 Anna - Liza Riddle
Add an image to this gallery
Retrieved from "https://sims.fandom.com/wiki/Anna-Liza_Riddle?oldid=821655"
Community content is available under CC-BY-SA unless otherwise noted.