Andy Plumber is a pre-made repairman who resides in Twinbrook. His name is most likely a pun on "Handy Plumber", which clearly matches his job and his Handy trait. Andy might be made playable by befriending him and then asking him to move in, but it would be a bad idea to ask him to marry you as he has Commitment Issues. His female counterpart is Maggie Net. 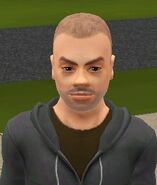 Andy Plumber in-game
Add an image to this gallery
Retrieved from "https://sims.fandom.com/wiki/Andy_Plumber?oldid=891586"
Community content is available under CC-BY-SA unless otherwise noted.