Andre DaSilva is a pre-made Sim who appears in The Sims 4 base game. He is one of six characters in five households who are included in the Gallery that ships with the game.

Not much is known about Andre other than his traits and aspiration. Like all Sims in the gallery, he is unemployed and has no skills.

Andre was featured in a number of pre-release promotional materials for the game during its development. Notably, he was one of three main characters who appeared in the First Look Official Gameplay Trailer, where he was shown involved in a love triangle with Ollie Purdue and Sophia Jordan. Andre shares his appearance with one of the default characters in Create a Sim, and appears on the old front cover art for The Sims 4. 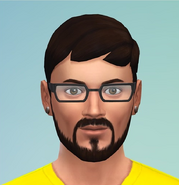 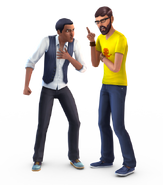 Official render of Andre and Ollie getting into an argument. In this render, Andre appears with a longer beard.

Andre as a toddler
Add an image to this gallery

Retrieved from "https://sims.fandom.com/wiki/Andre_DaSilva?oldid=893047"
Community content is available under CC-BY-SA unless otherwise noted.