Anarosa Dulce is a pre-made science geek introduced in Isla Paradiso from The Sims 3: Island Paradise. She can be made playable by marrying her, or asking her to move in. 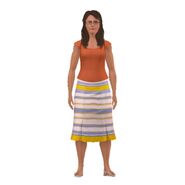 Anarosa's everyday clothing
Add an image to this gallery
Retrieved from "https://sims.fandom.com/wiki/Anarosa_Dulce?oldid=893729"
Community content is available under CC-BY-SA unless otherwise noted.