The Sims Wiki
Register
Don't have an account?
Sign In
Advertisement
in: Sims, Female Sims, Young adults,
and 15 more
English

Amber Stein is a Sim who appears alongside many Sims who are used in various promotional materials of The Sims 4. She appears in many official screenshots and videos. She can be downloaded from the gallery; likewise, she is also one of the default Sims available in Create a Sim.

She appeared in the The Sims 4 It's Amber - Weirder Stories Official Trailer on August 6, 2014. Although she is shown to be living in Oasis Springs in the trailer, she is nowhere to be seen in the actual game.

Amber and Sean's selfie getting photobombed by a Sim version of Barack Obama in the The Sims 4: Stories Official Gameplay Trailer.

The wall decoration featuring Amber was added into the Build catalog with the 1/7/16 Patch. 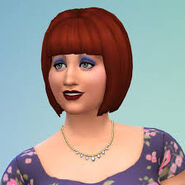 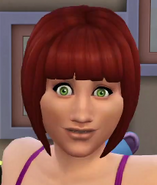 Amber without make up.

Amber in a promotional image for The Sims 4: Outdoor Retreat.

Amber Stein and Armand DiAggro getting married at the Romance Festival. Screenshot from the "The Sims 4 City Living: Official Festivals Trailer" from 2016.